The Rebels came up on the right side of the walk-off hit Tuesday when senior John Gatlin delivered the game-winning hit in the bottom of the ninth to push No. 4 Ole Miss (47-20) to a 2-1 win over No. 7 Texas Tech (45-21) at the College World Series.


With the win, the Rebels advanced to play again at 7 p.m. CT on Thursday on ESPN. Ole Miss will face the loser of Tuesday night’s game between No. 1 Virginia and No. 2 TCU
Scott Weathersby (4-1) picked up the win in relief, working the ninth with one run on one hit. Christian Trent took no decision in the start, despite working 8.0 scoreless innings, scattering six hits with one walk and six strikeouts.
Cameron Smith (4-1) took the loss for the Red Raiders, leaving the game with the go-ahead run on third with a walk and a strikeout before Dominic Moreno would yield the game-winning hit to Gatlin as the first batter faced in the ninth.
“(It was) just another low scoring close ballgame here, said Ole Miss head coach Mike Bianco. “I thought both starting pitchers were terrific. (Ryan) Moseley, although I knew he would be good, I didn’t know he would be that good; It as just one of those games were you needed to get a timely hit and we finally got one with Holt off the bench. He comes through with a huge hit that just squeaks down the line. You have to tip your hat to Tim Tadlock. They get a guy on and two gutsy back-to-back steals to get him in the game but I’m really proud of the way our guys responded.
“Our guys seemed very composed coming back to the dugout in the bottom of the ninth. I’m just proud we’ve got a couple freshmen off the bench with great at-bats and then of course John Gatlin gets a base hit. One of the great things about this profession is when young men like John, that are terrific representatives of our University, have good things happen to them. It was really neat to see him have a base hit to win it.”
Texas Tech looked to break the stalemate in the sixth inning, using a two-out triple to try to put together a rally and get on the board. Designated hitter Adam Kirsch tripled off the wall in right field to put a man in scoring position for third baseman Ryan Long. Trent answered the challenge, however, recording a strikeout to end the inning and keep Texas Tech off the board.
Ole Miss got on the board in the seventh with a two-out single from Holt Perdzock that snuck past a diving third baseman on the line. Sikes Orvis reached on an error and moved to second on a walk of J.B. Woodman to put two on with one out. A fly out put two away before the Rebels sent Perdzock to the plate to pinch hit for Preston Overbey. He then hit the ground ball down the third base line, bringing Orvis home from second and giving Ole Miss the 1-0 lead on the Red Raiders.
The Rebels turned to right-hander Scott Weathersby to open the ninth, holding to the one-run lead in the elimination game with the Red Raiders.
Texas Tech then evened the game in the top of the ninth with aggressive base running to set up the game-tying run. Kirsch got things started with a shallow single to center field before pinch runner Zach Davis took his place on the bases. Davis promptly stole second and third to set up the game-tying run on a sac fly from pinch hitter Anthony Lyons before the Rebels would get out of the inning.
Ole Miss grabbed the win in the ninth, countering with aggressive base running of its own to snatch the win and stay alive in the College World Series.
Pinch hitter Colby Bortles drew a one-out walk to put the game-winning run on base and moved to second on a ground ball back to the mound from pinch hitter Brantley Bell. Texas Tech looked to throw to second to erase Bortles from the base path, but the throw was high and the freshman jumped up and dashed to third.
Aaron Greenwood entered the game to run for Bortles with men at the corners and one out on the board. The Rebels sent John Gatlin to the plate to pinch hit for Dalton Dulin. That’s when Texas Tech made another defensive change, bringing in an extra infielder with three on the left side and two on the right.
Gatlin took a 1-2 pitch and drove it over the second baseman’s head to bring Greenwood home and push the Rebels to the walk-off win. 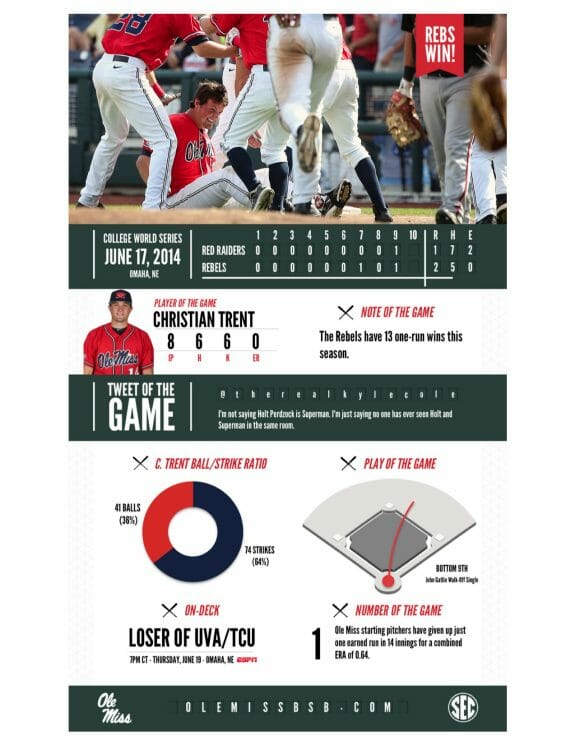