Admittedly, I am a political junkie, but I’ve slowed down in my old age. I am no longer on the state board of the Women’s Political Caucus, the NJ Federation of Republican Women’s board, president of the township’s Republican Club or chair of the township’s GOP committee. However, I remain president of my local Republican Club and a county GOP committeewoman.
And I still donate to political candidates and help run, as well as attend, some fundraisers. In fact, I was recently asked to stop by a gathering of political leaders in my legislative district in a nearby town. The speeches had already started, so Ken and I stood by quietly for a while and then slipped out the back door.
Instead of eating breakfast there, we decided to head back to my house where Ken offered to make coffee and fry bacon while I “surprised” him with a special breakfast. We often have pancakes or bacon and eggs, so this time I decided to make French Toast. I had some stale white bread and started whipping up the coating for this sweet treat.
French toast is best made with thick slices of hearty bread such as French – surprise – or Italian. Unfortunately, my white bread became very soggy, so I cut each slice into four pieces to make them easier to handle and flip. However, the results were delicious. Ken noted that he didn’t usually like French Toast, but mine was really good. Here’s my recipe: 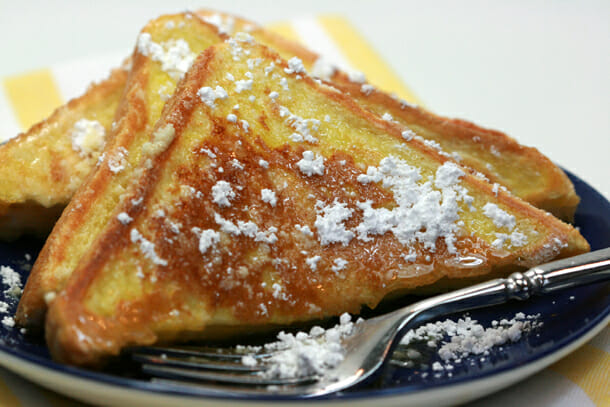 French Toast
3 eggs
1 tablespoon sugar
2/3 cup milk
¼ teaspoon ground cinnamon
6 slices bread
butter or margarine
Break eggs in a bowl and whisk in the sugar, milk and cinnamon. Mix well.
In a skillet, melt some butter or margarine.
Dip the bread in the egg mixture, soaking both sides.
Place bread in heated skillet and brown on both sides.
Remove from skillet and place in a warm oven while cooking the other bread slices.
Serve with maple syrup and sprinkle with powdered sugar.
NOTE: I added fresh peach slices to the maple syrup and kept this warm in a small pan over a low heat. I find putting the egg mixture on a plate makes the dipping easier. And I only used three slices of bread, which soaked up all the liquid.
Eating this breakfast reminded me of a time back in 2002 when my late husband and I stopped at Rosedown Plantation in St. Francisville, La. There I talked with Richard Scott who had prepared a breakfast feast in the rustic kitchen for Louisiana Public Television. He suggested a recipe from an 1885 Creole Cookbook. Here’s that recipe for Pain Perdu or “Lost Bread.”
Pain Perdu
“Take a pint of fresh milk and sweeten it with a cup of sugar, stir two beaten eggs in it and season with any flavoring you like. Cut six slices from a loaf of bread, soak each piece of bread a few minutes in the custard of milk and sugar already prepared, take the pieces out one by one and fry them in butter made hot in a frying pan, pile them up and serve hot.”
When I made that recipe I substituted half and half for milk and seasoned with ground allspice.
Sidna Brower Mitchell can be reached via e-mail at sbmcooks@aol.com.