The Determination and Love of a Dad

A miracle happened this past weekend.
Augie Nieto succeeded in walking his daughter Lindsay down the aisle at her wedding Saturday. Battling ALS, the 56 year old Nieto was determined to do this for her and has worked out relentlessly to get some movement in his legs to be ready for her special day. He started training 18 months ago and took dead aim on making this happen.
Saturday, his four brothers lifted him into a special harness. With the help of Velcro-fastened harnesses, aluminum scaffolding, a person crawling behind him to bend his knees, and with a ventilator in his wedding trail, he was able to do it. 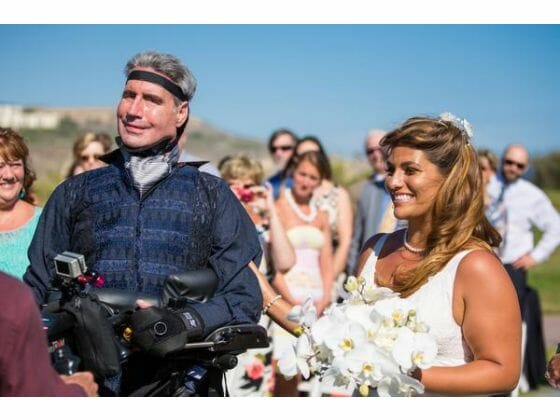 ALS had robbed him of every physical movement except being able to move his toe (he has written two books with his toe) and blinking, but he had them turn his wheelchair into an exercise machine and through sheer willpower some of his muscles are working again. One expert said they have never seen anything like it in ALS history. 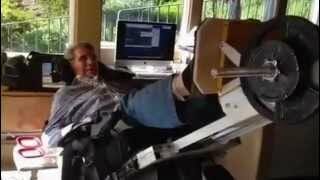 As they walked down the aisle, the music was Jason Mraz’s ‘I Won’t Give Up.’
Nieto has a true fire within. Before ALS, he created the successful Life Fitness. Then, eight years ago, he started falling suddenly and the diagnosis was ALS. No one thought he would make it this far, but he has and along the way has founded Augie’s Quest which has made huge strides in finding a cure for ALS.
Before he walked his daughter down the aisle, he was asked by the organization Communicate Good what was the difference between being successful and being significant?
“Before I was diagnosed with ALS,” said Nieto, “I had success. It wasn’t until after my diagnosis that I became significant. Being significant has more to do with being worthy of the attention and importance placed on your success. You have to ask yourself, “what will I be remembered for?” If you’re successful, you might not be missed. If you’re significant, you will be missed.”
[dhr]

Farewell to the amazing Louis Zamperini

It was a week ago here in the Tuesday enewsletter that I wrote extensively about Louis Zamperini. You know how we often get gut feelings about something? I had this tugging feeling that Louis was not going to make it to be the grand marshal of the Rose Parade on January 1st of 2015.
The subject of the massive best seller Unbroken, the day after I wrote about him in this newsletter he passed away from pneumonia at the age of 97.
The Rose Parade says he will not be replaced as grand marshal.
“Louis Zamperini was and will continue to be the embodiment of the 2015 Tournament of Roses theme ‘Inspiring Stories.’ We are honored to shine the light on one who truly lived a life of unconditional love, courageous perseverance and patient endurance. He shared with us that his faith in God was his inspiration to be content in plenty and in want.” – Richard Chinen, Tournament of Roses President
I have followed author Laura Hillenbrand on Facebook, and her posts the last week have been so heartfelt and inspiring. Here is one:
“It is with tears and the heaviest heart that I share the news of the passing of Louie Zamperini. He died peacefully in his sleep last night, surrounded by his loved ones. He lived ninety-seven beautiful, extraordinary years.
A reporter who interviewed me this afternoon asked how old Louie seemed in his last years. I thought of this photo below, Louie on his last birthday, his 97th, wearing his birthday boy sombrero. I spoke to him that day and he was full of laughter, joy and big plans. To the very last, he was madly in love with life. Louie Zamperini lived a century and never got old. 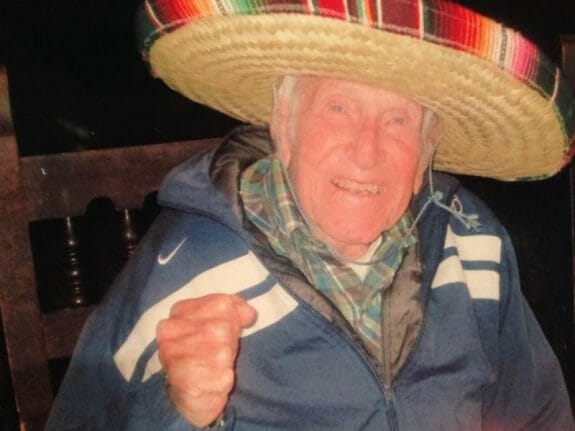 In a life of almost unimaginable drama, he experienced supreme triumphs, but also brutal hardship, incomprehensible suffering, and the cruelty of his fellow man. He was an airman, a plane crash victim, a castaway, he was attacked by sharks and strafed by his enemy, he was a POW and a slave, he struggled with post-traumatic stress disorder. But Louie greeted every challenge of his long journey with singular resilience, determination and ingenuity, with a ferocious will to survive and prevail, and with hope that knew no master. His life would not be a sad story because he would not allow it to be. His story is a lesson in the potential that lies within all of us to summon strength amid suffering, love in the face of cruelty, joy from sorrow. Of the myriad gifts he has left us, the greatest is the lesson of forgiveness.
– Laura Hillenbrand, author of Unbroken, with her tribute on her Facebook page.

Among the many things we can take from her tribute is that wonderful description of Zamperini being a man who reached 97 but … never … got … old! Wow.
As I wrote here last week, Hillenbrand and Zamperini forged a tight bond during the years it took her to write Unbroken. Because of chronic fatigue syndrome, it takes Hillenbrand way longer to do things than you and me. They had over 75 phone conversations during the writing, some lasting over three hours long.
When Zamperini later learned she had battled fatigue for decades, sometimes to the point of not even being able to sit up in bed, he gave her his Purple Heart. Hillenbrand shared this picture of the note her wrote her below. 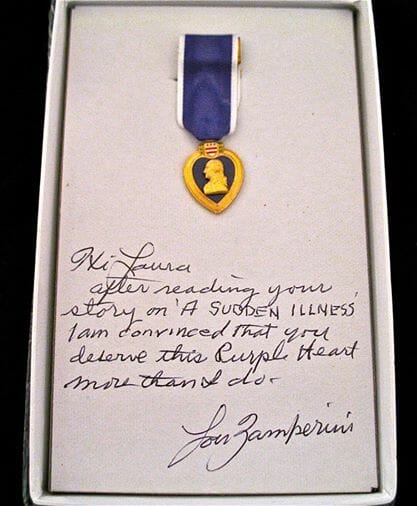 My goodness.
Zamperini maintained a sense of humor until the end. When production of the movie ‘Unbroken’ started in 2013 he joked that “it better not take too long to make this movie!” Even though he had survived so much, he knew there would come a day God would call him home.

What an amazing man.
He skied until he was 91 and at 65 took up skateboarding, which he didn’t give up until the age of 81. But he still jogged at 87.
In future Stoke the Fire Within presentations I am going to share the amazing life story of Zamperini so that others continue to be inspired by his remarkable life.
This was nice to receive:
Charlie, did you see where Louis Zamperini has passed away? Had it not been for your article, that wouldn’t have meant very much to me and I likely would have passed over it. Thanks for bringing his life and legacy to me via your “Stoke the Fire Within” I will be sharing it with others. Best Regards, Andrea Bogard, Bogard Insurance Group
(if you missed last Tuesday’s newsletter on Zamperini, click here if you would like to read it)