Eileen Hogan of Alchemy in Memphis, TN, showcases her fun and fruity cocktail, the Kiwi Herman.
Alchemy, located in the heart of Memphis’ midtown area, has a spacious, open-air feel to it, with an impressive array of liquors and knowledgeable staff. Their cocktail menu is extensive, boasting creative names and recipes. They also have the perfect July drink: the rum-based Kiwi Herman, which is equal parts sweet and summery. Andy Seymour, of NYC-based Liquid Productions, helped in the development of Alchemy’s cocktail program. Eileen Hogan, the manager of Alchemy, explains that he taught the staff, “how to mix drinks, and taught us how to take a liquor and mix it with a different liquor, add a different ingredient, and then taste it to see how it completely changes the flavor profile of that drink. 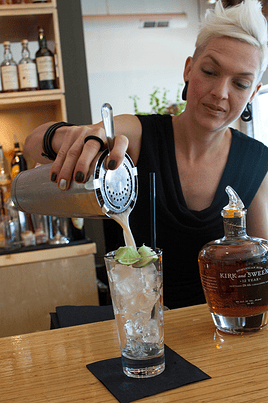 He came in and stayed with us a week, and then he came back every couple of months, and we would come up with our own cocktails, and he would taste those.” Beyond Seymour’s help, Hogan says that they aim to hire staff that is open and willing to be creative, which in turn allows them to come up with their own ideas. And with Alchemy’s wide selection of base liquors, being on the creative end of drink mixing looks incredibly fun.
Hogan attempts to control the atmosphere with music. “I would think if we were a little louder and a little darker, then maybe people would drink faster and different drinks. But when you come in here, I’d like to think that the guests would want to relax.” The place is flanked with wide windows, and the bar is vast. There are also tables and booths scattered about the place to encourage more intimate groupings. “The atmosphere definitely plays a role, and also, my staff plays a massive role, because I want them to be engaging and friendly. That way, if you’re here by yourself, you’ll want to stay and have another cocktail, and learn a little about us or learn a little about Memphis,” Hogan says.
Hogan is the creator of the Kiwi Herman. She admired the Kirk & Sweeney rum bottle, due to its unique shape and pleasant aesthetic. The rum itself tastes buttery, and is surprisingly smooth on its own. After deciding she wanted to incorporate the rum in a drink, she thought the complementing flavors of kiwi and strawberry would enhance its already sweet undertones. When Seymour was in town, he added the bitters, and Hogan got her staff to try the drink. A staff member, after tasting it, surprised everyone by saying, “It’s the Kiwi Herman!” Hogan liked the name so much that she dubbed her drink as that. Hogan worked at the Hard Rock Café in Nashville, TN, for close to twelve years, before making the move to Memphis. She then worked at a number of places around town. After being hired at Alchemy as a bar tender, she soon began to long for more responsibility, which in turn landed her in the managerial role.


On working at Alchemy, Hogan posits that her favorite part is working with and for the people. “I love the owners and the staff that I work with. Our guests are also fun and cool—and they’re my friends now. And having the liberty to do whatever we’d like to do.” It’s places like Alchemy that give Memphis a good rep in regards to nightlife. It is inviting, but also has an upper scale aesthetic that suits its posh, downtown setting perfectly. There’s good food and good drink, all in a pleasant, centralized atmosphere that is both relaxing and urban for its customers, no matter the time of day.
Story by M.B. Sellers, Photos by Casey Hilder, CLICK Magazine July 2014, www.myclickmag.com
Facebook
Twitter
Pinterest
Previous articleREMINDER: New Oxford SD Times for 2014-2015 School Year
Next article5 Places You're Probably Forgetting to Put Sunscreen