What! Did “John Wayne’s” Cavalry Try to Burn Pontotoc’s Lochinvar?

It’s a bit sad that modern Mississippians know so little about Scotsman James Gordon, Ole Miss grad class of 1855, CSA Colonel, Mississippi  U.S. Senator, and owner of one of the most famous antebellum homes in Northeast Mississippi—Lochinvar, just south of Pontotoc.

It’s been destroyed several times, but it’s still there, and getting better and better every day.

Lochinvar plays a role in my family’s history: the legend that John Wilkes Booth is buried north of Tupelo in my family cemetery and that Booth allegedly consorted with owner Col. James Gordon during and after the Civil War. When I learned this from researching the JWB story I decided to visit Lochinvar and see if it is actually there today.

I was returning from a recent visit to Ole Miss with my wife. I wasn’t sure I was up to it but Martha was fascinated with the story and insisted we try to find it. It is south of Pontotoc. I got lost and had to visit the police station for directions. I turned up the gravel road to a small sign, and stopped at the gate. It was beautiful farm setting and in the distance stood a very large, white plantation house.

For some reason, I still wasn’t certain this was the place. I drove around to the back, came back around to the front, stopped, and called Dr. Forrest T. Tutor. He is a retired neurosurgeon who now owns Lochinvar and who had invited me for a tour the time I called seeking information about JWB and Col. Gordon.

He answered the telephone and I told Dr. Tutor — who once practiced at the Northeast Mississippi Medical Center in Tupelo (where I was born)—that I believed I was in the front yard of Lochinvar, and “someone appears to be living in the back.” 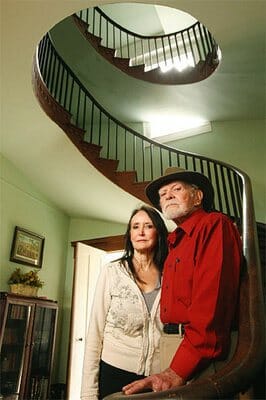 A few minutes later I was inside the mansion learning about Mississippi history. Dr. Tutor has written a great book, The Gordons of Lochinvar, (A few may still be available at Amazon.com) which tells the history of the Gordon family.

And John Wayne and the cavalry? They are coming fast and hard. But first:

The original Lochinvar castle was in southern Scotland centuries ago. Once the stronghold of the family, the ruins are now submerged in a reservoir marked only by a small cairn.

According to Dr. Tutor’s book, the Gordon family arrived in America in the early 19th century. The senior Gordon, James’ father, settled his family in Chickasaw Indian Territory and was a “shrewd” trader. When the Chickasaws were moved westward, he bought huge amounts of cheap land and quickly became rich. He built Lochinvar and worked his land with slaves. (As did my Guntown relatives at the time).

Gordon was tremendously wealthy until the Civil War erupted.  The war devastated him and many Mississippians and he “died a ruined man in a ruined land with all the fruits of his long years of labor gone to waste…”

James was a real go-getter and elected to the Mississippi legislature at age 24. He was well liked, Dr. Tutor said, but “made no great splashes in the halls of government at that time.” In 1859 James visited New Orleans to plan a hunting trip to Africa with friends. He had no idea a war was looming until he visited New Orleans. Everyone there seemed to know it was just around the corner. He cancelled his safari and came rushing home with an assortment of army equipment to form a cavalry unit.

Dr. Tutor said he cancelled his safari because he and other young men were afraid the South would whip the Yankees so quickly they wouldn’t have time to get into the fight. Against his parents’ admonitions, the Chickasaw Rangers were formed on May 18, 1861 by Captain Gordon who asked for an assignment.

He got it and joined J.E.B. Stuart for several Virginia campaigns. Like other Confederates, he soon realized the war was not going to be over quite so rapidly, and he applied to return to Mississippi and form a battalion of cavalry. The plan was accepted, and Lt. Col. James Gordon then joined Col. Frank Armstrong’s brigade in the cavalry of Gen. Sterling Price.

Armstrong’s Brigade was organized at Guntown, Mississippi in August 1862. And this is where I speculate that Gordon probably met my Guntown relative, Dr. John Fletcher Booth, a doctor, who had also formed a company.

In a family legend, Dr. Booth sheltered John Wilkes Booth at his home in Guntown for many years after the assassination of President Lincoln. It sounded so preposterous to me when I first learned of it I thought it as foolish as everyone else. But after years of research, and the realization that that almost all of my other living relatives believe it, I’m not certain of anything. The legend goes that John Wilkes Booth also visited Lochinvar for meetings with fellow veteran James Gordon.

There was considerable fighting in the area, especially in nearby Corinth. It was near there, around March 5, 1863, that Lochinvar was saved from the coming fury of “John Wayne’s cavalry.”

After the Battle of Thompson’s Station in March 1863, Col. Gordon’s troop was ordered to take 1,100 captured Yankees from the battlefield to Tullahoma, Tennessee. Here’s how Dr. Tutor’s book described what happened next:

The captured Yankee colonel, Wm. L. Utley, in reporting to his superior later, said: “The prisoners were placed under the charge of Lt. Col. James Gordon of Mississippi. It gives me great pleasure to say of Col. Gordon that he treated the officers with extreme kindness and did everything possible for the men.

“I believe he did everything in his power to furnish the men with suitable rations. They were not to be had and he could not help it. But when we reached Tullahoma, the scene changed. Here, to the regret of us all, we had to part with Col. Gordon and his escort.”

Col. Utley’s superior, General Coburn, asked the Confederate Commanders present if he could present his sword and a note of appreciation to Col. Gordon for his kindness toward the Union prisoners and this was done.

In April 1863, Col. Benjamin Grierson, with 1,700 Yankees, was sent by General Grant into northern Mississippi to cut the railroad access between Newton’s Station and Vicksburg and generally cause havoc. It was part of the campaign to take Vicksburg and was almost bloodless. Before the war, Grierson had overcome his fear of horses resulting from being kicked in the head as a youngster.

Grierson fought in campaigns in Tupelo, Verona and captured 500 hundred prisoners at Egypt Station, near Okolona. But wasn’t always peaches and cream for Grierson. His division was part of Brigadier General Samuel Sturgis’s command when it ran afoul of Nathan Bedford Forrest at the Battle of Brice’s Crossroads on June 10, 1864. Forrest routed the much larger Union Calvary and on every anniversary since 1929 re-enactors do it again before a huge, screaming crowd.

After the war, Grierson organized the new 10th  Calvary Regiment, the original “Buffalo Soldier” regiment. He believed strongly in his men’s fighting skills, but was ostracized by many other officers who doubted the military ability of his African American troops. He proved the naysayers wrong. Brigadier General Grierson was crippled by a stroke in 1907 and died in 1911.

It was during his earlier path of devastation in North Mississippi in 1863 that Grierson’s cavalry passed by Lochinvar.

This raid inspired the movie, The Horse Soldiers, with Grierson played by John Wayne as Col. John Marlowe, who stopped at “Lochinvar.”  It was April 21, 1863 when the real Yankees arrived in Pontotoc.  Gordon had sent the note and the sword to his wife Virginia. The historical account goes that Gordon’s wife walked out to meet Grierson’s adjutant, Lt. Samuel Woodward, sent by the colonel to raid for supplies and perhaps burn Lochinvar to the ground.

Virginia met the troops and showed Woodward the note from Yankee Col. Coburn.  Dr. Tutor says Woodward not only spared the house, but posted a guard to prevent any straggler from harming it. Dr. Tutor still has the sword at Lochinvar.

In the movie Horse Soldiers, as best as I can recall, it wasn’t a note from a general, but a good-looking Southern belle who turned Col. (John Wayne) Grierson/Marlowe’s attention away from the torch. I don’t remember Lochinvar even mentioned in the movie — but in my experience a Southern belle always trumps a Yankee note.

I’ve saved the best for last in this chapter: Among the many stories surrounding John Wilkes Booth, Gordon and the assassination of the president, is the one about a plot — a deadly serious one. This could be a jolt to some youngsters today, but white Southerners of the time hated Lincoln!

There is a story that there was a conspiracy of Southern sympathizers who wanted to remove Ole Abe:  A group which met secretly in Canada in an effort to kidnap him and force a settlement which would not devastate the South.  Or perhaps kill him.

Yes there was.  According to Dr. Tutor, John Wilkes Booth was present at those meetings. And so was James Gordon of Lochinvar!

Tomorrow — A $10,000 price is placed on the head of Col. James Gordon; Enter John Wilkes Booth.

(Lochinvar is located at 300 Lochinvar Loop in Pontotoc, MS, 38863 and Dr. Tutor’s telephone number is publicly listed if you would like to order his book or request a tour).

HottyToddy.com contributor Dick Gentry was the Summer Editor of The Daily Mississippian prior to the 1962 riot at Ole Miss. He left Ole Miss shortly after and later graduated with a degree in journalism and business from Eastern Washington University in Spokane, where he was a writer for the Spokane Daily Chronicle. His career also includes editor and publisher of The Caymanian in The Cayman Islands; executive editor of Hawaii Business Magazine; editor of Atlanta Business Chronicle and executive editor of the Birmingham Business Journal.