How Blueberry Salad Makes All the Sense in the World

Our friend Pat found his cancer had returned and he was given a few months to live. He decided to get his life in order. Well, actually our mutual friend June decided for him and in no uncertain terms told him what he needed to do.
Pat followed some of her advice, ignored other pieces and chose to have some fun first. He invited Ken and me to lunch one day and began asking our advice. For example, since he has no siblings or children, he questioned what he should do with his money. A graduate of Harvard and a French teacher at the Lawrenceville Prep School, he noted he could donate to those institutions.
Ken and I suggested if he did that not to simply give to the general funds, but donate the money for scholarships in his name. Pat seemed to think that over, but somehow didn’t appear enthusiastic about those ideas.
Knowing that Pat is a liberal Democrat, Ken kiddingly said, “Or you can give your money to the Republican National Committee.”
Pat almost came across the table as he shouted, “Over my dead body!” Ken responded, “Well, that’s the idea.”
Then Pat, realizing what he had said, started laughing as Ken and I joined in. The couple two tables away looked at us as if we were crazy.
But two bottles of wine were shared and the three of us went away in pleasant spirits.
Later in the week, we had Pat over for a Sunday evening salad. I found the recipe on the Internet from a July 2005 Southern Living. When I read the recipe to Ken, he suggested putting more fruit in the salad, such as dried cranberries.
Of course, I made some changes, including cutting the recipe in half. Here’s my version of an attractive and delicious salad that both gentlemen suggested I put in my cooking column. This makes three to four servings. 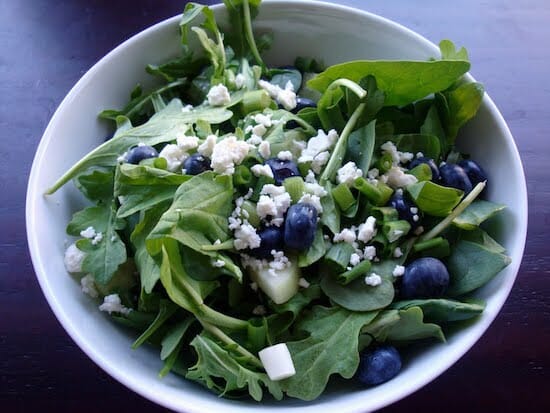 Blueberry Salad
4 cups baby spinach
1 cup fresh blueberries
1/2 cup crumbled Gorgonzola cheese
1/4 cup chopped pecans
1/4 cup dried cranberries
Balsamic vinaigrette
While snipping off the stems of the baby spinach leaves, soak the dried cranberries in the Balsamic vinaigrette.
Place the spinach leaves in a salad bowl. Drain the cranberries. Reserve the vinaigrette. Sprinkle the Gorgonzola cheese, pecans and cranberries over the spinach.
When ready to serve, dress the salad with the vinaigrette, adding as much as needed. Serve with toasted French bread.
NOTE: Southern Living suggested using Newman’s Own Light Raspberry & Walnut Vinaigrette. I wonder if they used walnuts in their salad.
Sidna Brower Mitchell can be reached via e-mail at sbmcooks@aol.com.