The Vassallo Interviews — Steve Vassallo is a HottyToddy.com contributor who interviews Oxford’s and our region’s leading personalities.

Steve said, “Ole Miss can be proud of many outstanding alums, but few have reached the level of success in life as has former Governor Haley Barbour. This multi-talented individual is someone I could listen to for hours as his insights into our state, country and world are interesting beyond description. I caught up with him “on the run” as slowing down is not part of his demeanor.

HottyToddy.com — Governor, looking back on your eight years as Mississippi’s CEO, other than your incredible success handling the aftermath of Katrina, what comes to mind among your other outstanding accomplishments?
Haley Barbour — The state was in very poor financial shape when I was elected. In fiscal year 2004, the state spent $710 million more than it received in recurring revenue. There was a 20 percent budget shortfall. It took us two years to dig out, and we did it without a tax increase! We reorganized the state’s workforce training programs and diverted significant funds to the community colleges for skills training programs, while the unemployment insurance tax for employers was substantially reduced. Mississippi’s economy grew largely by increasing the number of higher skilled, better paying jobs, thereby raising per capita income in the state by 34.2 percent over eight years.
HottyToddy.com — Wow! (Over time one forgets these amazing feats!) Tell us how your days are filled currently.
Haley Barbour — I’m working harder than I meant to. I am still actively engaged in the lobbying firm in D.C. that I founded in 1987. I am spending an average of 8-9 days a month in Washington or about 100 days a year. I also serve as Counsel for ButlerSnow in Jackson. I am often invited to speak across the country. Marsha and I still live in Yazoo City, which is our permanent home.
HottyToddy.com — Will an elected official from our state ever be a serious contender for the Presidency or VP position, or are we simply too small a state to matter?
Haley Barbour — I actually considered a run for President in 2012. However, it’s a full-time job and you have to be “all in” or not in at all. It is to the exclusion of everything else in your life. After my experience I believe an individual from Mississippi who has a credible record can compete on this stage.
HottyToddy.com — It’s apparent you truly enjoy your time in Oxford. At some point would you consider making this your permanent residence? 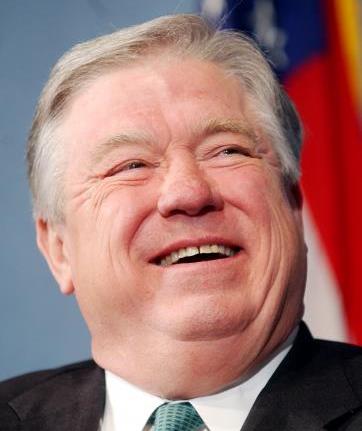 Haley Barbour — No, not really. I was a student here on and off for eight years counting law school. I made great friends and love Oxford. However, Yazoo City is where our home is.
HottyToddy.com — Shifting gears, I wanted to ask you about the gaming industry. Now that the casinos have been operating here for three decades, are the dividends for the state still significant?
Haley Barbour — Oh they are! The gaming industry was hit very hard by the recession, but they have made a $10B capital “on land” investment. They continue to remain a very large employer and major taxpayer. The casinos bring people to Mississippi who otherwise would not come here. We are a great resort location and this is very good for our image.
HottyToddy.com — Looking at our country from a national perspective, it appears we are more divided than ever. Is there a ‘Ronald Reagan’ out there who can unify this nation?
Haley Barbour — I very much hope so. We are politically more polarized than at any time in my life. In the 1960 and 1968 elections the electorate was evenly divided but “bunched up” in the middle. The center is now smaller than ever. It takes a leader in the White House to pull us together. During this administration, the very rich have done quite well due to the Fed policy of low interest rates, but middle income and working class families have suffered. In fact, they have fared worse financially during the Obama recovery than they did in the actual recession which started in 2007.
HottyToddy.com — The 2016 presidential sweepstakes is already starting to consume a considerable amount of time on the national talk shows. If the nominations were made today, who, in your opinion, would the candidates be?
Haley Barbour — It is way too early to predict. First we have a hugely important election in November that will decide control of the Senate. As to 2016 on the Republican side, there will be a large field with no true front runner. These candidates will be able to run on significant records of achievement. On the Democratic side, Hillary remains the primary focus; however, I thought she would be the certain nominee in 2008.
HottyToddy.com — The Tea Party was alive and well in Mississippi this summer. Do you see this movement as a permanent third party presence?
Haley Barbour — No I don’t. The vast majority of Tea Party supporters agree with rank-and-file Republicans on issues about 90 percent of the time. They have chosen to participate in Republican primaries unlike the Perot supporters in ‘92 and ’96, who started a third party. I am more concerned about the “Washington-based political gunslingers” who are pushing purity in the party. More than 60 million voters cast ballots for each of the two major party candidates for president in 2012. While the Republicans are the conservative party and the Democrats are the liberal party, both are broad, diverse parties. It is silly to think in a party as large as ours that everybody would agree on everything, or on anything. The people who push purity act as if everyone else must agree with them on every issue. In two-party politics, purity is the enemy of victory. Unity produces victory.
HottyToddy.com — Looking ahead to 2016 what are the 2-3 issues that could dominate the debate between Republicans and Democrats? 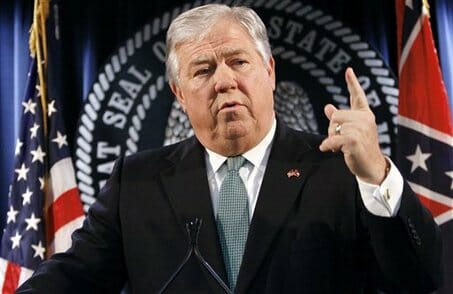 Haley Barbour — The dominant issue will be the weak economic performance of the Obama Administration. This has been the weakest recovery in American history. Median household income is still 4.8 percent lower than at the start of the recession in 2007. Fewer Americans (47.8 percent) have full time jobs than at any time since the 1970s. Healthcare will continue to be an important issue as most Americans are paying more and getting less. Because our foreign policy is so flawed, this could also become a significant contributing campaign issue.
HottyToddy.com — Your name has been mentioned a great deal previously for a variety of positions ranging from politics to education and everything in between. Is there another post out there that intrigues you such as Secretary of State?
Haley Barbour — I’ve had my last government job. My eight years as Governor were wonderful, but eight years are enough.
HottyToddy.com — You attended Ole Miss during an era when life was less complex aside from the Vietnam War. What would you say to our upcoming graduates today about the world that they will be entering?
Haley Barbour — This world is ever changing. The effects of technology are so much greater today than at any time previously. Many of the products that our graduates are using today in their everyday lives did not exist when they were born. Change will only accelerate, and it will be a main part of their future. However, Americans adapt better to change than any culture in the world. When I was an undergraduate at Ole Miss, I read that there would be two kinds of people in 20 or 30 years — those who understood computers and those who didn’t. I laughed then, but over the past 50 years I have come to fully appreciate that idea.
HottyToddy.com — Looking back upon your distinguished career, if there was just one career decision that you could have changed (if any), what would that have been?
Haley Barbour — There is not anything of a major consequence I would have done differently. In the late 60’s I had no idea that I would head in the direction I have. One of the best things that happened to me was losing the election for Student Body President at Ole Miss in 1968. Because I lost, I was free that fall to run 30 counties in Mississippi for Richard Nixon’s election. In retrospect, this was a blessing as it started me in a direction that impacted my life.
HottyToddy.com — When you and Marsha are able to get away and relax, what places entice you for either a long weekend or a week or more to escape?
Haley Barbour — We have a place between Destin and Sandestin that we enjoy, as do our children and grandchildren. We also go to Aspen a couple of times each year. There are so many great places in the United States to visit, including Oxford.
HottyToddy.com — Earlier in the week I asked Senator Lott this question that I would also like to pose to you. How many games will the Rebels win this year?
Haley Barbour — Either eight or nine during the regular season plus one or two more after that. We’re currently ranked 18th in the nation, but 4th in the SEC West. This says a great deal about our level of competition.
Haley Barbour will remain a large and important voice not only in Republican circles, but also in the future of our nation. Like Trent Lott, losing the Student Body election for President at Ole Miss was a future indicator of greatness. It would be hard to argue otherwise.
Steve Vassallo is a HottyToddy.com contributor. Steve writes on Ole Miss athletics, Oxford business, politics and other