Ole Miss has been on the road two weeks in a row, but that doesn’t stop the Rebel family from going all out to watch the game.


“We may not win the game, but we never lose the party,” is a common saying around Oxford and Ole Miss, and the statement has rung true for the last two weeks around Oxford as Ole Miss fans have gathered on the Square, on campus and around Oxford to watch the game with fellow Rebels. 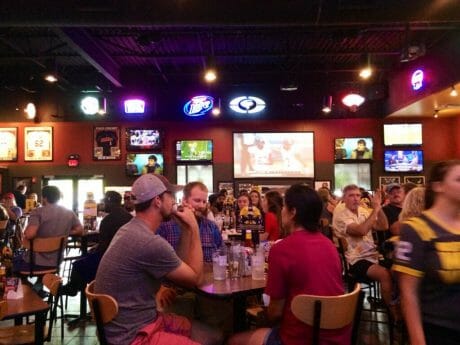 Ole Miss was able to defeat Boise State 35-13 after a tough first half during the first week of college football action, and the Rebels are rolling over SEC East competitor Vanderbilt University 41-0 with three minutes left in the third quarter.
Next weekend, the Grove season officially begins when the University of Lousiana-Lafayette visits Oxford for Ole Miss’ first home game of the season. Kick-off is scheduled for 3 p.m.
ESPN announced Friday that if the Rebels remain undefeated until the Crimson Tide comes to Oxford on Oct. 4, College GameDay, the pre-game show that has never visited the No. 1 tailgating experience in the NCAA, will broadcast live from the Grove for the first time in the show’s history.

A family gathers at Boure in Oxford to watch the game for one of their family members who has leukemia. From right to left: Adam Brady, Alissa Lilly, Bill Lilly, Meagan Arnold, and Paul Hymel.

Amelia Camurati is managing editor at HottyToddy.com and can be reached at amelia.camurati@hottytoddy.com. Molly Brosier is a staff writer and can be reached at mebrosie@go.olemiss.edu.
Facebook
Twitter
Pinterest
Previous article
Rebel Faithful Travel to Nashville for Vandy in Week 2
Next article
Ole Miss Thumps Vanderbilt 41-3 in Nashville