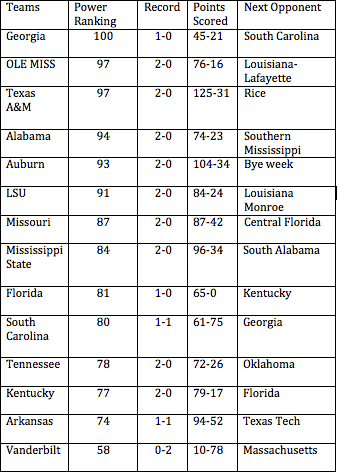 Ole Miss took one of the biggest leaps from last week as the Rebels trumped a 20-point favorite’s role by 18 more on the road versus an SEC opponent. Most of the remainder of the league held close to last week’s position save the boys from MSU as they struggled with UAB. It’s apparent now who has the better defenses in the league with Ole Miss and Bama clearly leading the way.


Each week we project the Rebels’ final Won-Loss tally with this week having it at 10-1-1. I realize that there are no ties, but the LSU game at this juncture is too close to call. The Texas A&M game still appears problematic, more than the others. In any event, this Rebel team is not to be taken lightly despite what the Alabama mouthpieces are saying on the SEC Network. Did they really think we were only 3 points better than Vanderbilt?