Tunica Casino Sheen is Fading, but No Rescue Effort is Likely

Grass is reclaiming the acres of parking that served what was Mississippi’s largest casino complex. One white pickup with a blinking orange light now prowls the vast real estate of Harrah’s Tunica — the only security remaining from 1,000 folks who lost jobs three months ago when Caesar’s Entertainment decided to stop losing money at the venue and shut it down. 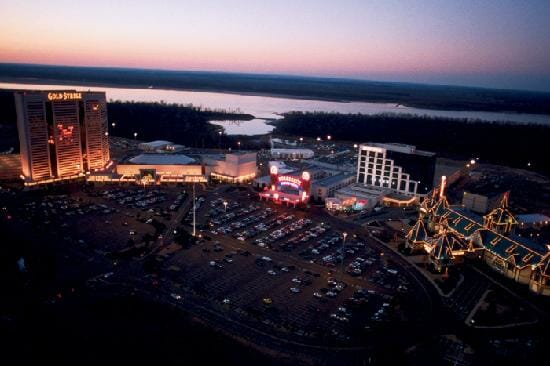 Tunica County, a stone’s throw from Memphis in the northwest corner of the Delta, was listed among America’s most poverty-stricken in 1990, the year Mississippi lawmakers opened the state’s river and coastal counties to Las Vegas-style entertainment.
Man, the changes that came. For one thing, Tunica, the town, canceled property taxes. The $2 million a year harvested from casinos (along with sales tax rebates) was plenty to keep the place flush … more money that locals ever dared dream of receiving.
Today, official Tunica is nervous that the cash tap may run dry.
It won’t. Not anytime soon.
The casino industry is still more than viable in Tunica — Caesar’s Entertainment still operates two large properties there and six other casino-hotels welcome patrons — but it seems clear enough that the growth trend has reversed. From that corner of the state south along the Mississippi and east along the Gulf Coast, revenues are slipping. In central Mississippi, the Silver Star and Golden Moon — operated by the Mississippi Band of Choctaw Indians and not subject to state casino taxes — are also not what they were. Golden Moon, perhaps Mississippi’s most impressive structure of any type, has closed except on weekends for several years.
What’s going on?
Well, for one thing, some type of casino experience is now available in all except 10 states. Can you say “glut?” For another, the appeal of gambling has run hot and cold through all American history, back to the lottery-financed Revolutionary War.
But the over-arching reality — the one that may matter most — is that official Mississippi has been and perhaps always will be of two minds on this topic. State and local governments adore the cash, but have a disdain to think about or discuss the behavior that generates it.
This goes back to the beginning. About the same time casino legislation was wending its way through the back channels of the Legislature, the Supreme Court was deciding whether the Mississippi Constitution would allow charitable bingo at VFW posts. Yet when lawmakers went home, the media (and many lawmakers) discovered a statute — passed with absolutely no discussion or debate and with few fingerprints  — that put Mississippi in direct competition with Las Vegas and Atlantic City.
Within a few years, Mississippi actually had more total square feet of casino space than along the New Jersey coast.
Taxation methods vary from place to place in the state, but for the most part it’s accurate to say 12 cents of every dollar a customer leaves at one of the 21 state-regulated casinos flows to a city, county or state bank account.
Starting in 1992, gross gaming revenues rose sharply and steadily every year (except 2005 due to Katrina), but the total peaked at $2.8 billion in 2008 and has been sliding since. Every month (except June) this year has been leaner than the same month last year. The casinos are actually on the same revenue pace they were way back in 1997.
All those spinning slot wheels and rolling dice have generated a jackpot of $4.5 billion in state and local taxes. On a yearly basis, that money funds only about 4 percent of state spending, but it provides 30 percent or more of all the money local governments in casino towns and counties harvest and spend.
It’s also pretty compelling is that even with Harrah’s Tunica shuttered, the casino industry still employs more than 20,000 people. That’s at least four times as many as the Nissan and Toyota plants combined and almost twice as many as the state’s largest single employer, Ingalls Shipbuilding.
Still, in the Capitol the prevailing attitude is that gambling is “sin.” Other jurisdictions may have come to grips with it as “entertainment,” but not Mississippi. If any other industry needed help, state officials would be offering incentives or assistance.
But no one is talking about any government actions that might sustain or bolster casinos. Official Mississippi’s reaction to the numbers is kind of like what can be heard at a craps table: Oh, well. Easy come, easy go.”

Charlie Mitchell is a Mississippi journalist. Write to him at Box 1, University, MS 38677, or e-mail cmitchell43@yahoo.com.