October 2, 2014
0
340
Barbara “Mimi” Harris is Ole Miss’ biggest fan, even if she can’t remember the final score. But after her first trip to Oxford for game day, she’ll forever be a Rebel.
Mimi made her first trip to watch the Rebels play when Ole Miss took over the Georgia Dome in Atlanta against Boise State this season. Her daughter-in-law Joyce contacted HottyToddy.com with the sweetest story about her first Ole Miss game. 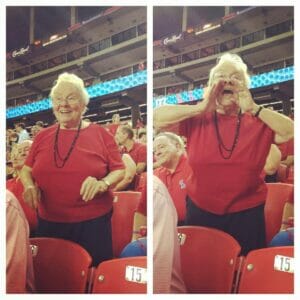 “Barbara has dementia but still insisted on going to her first Ole Miss football game (against Boise State in Atlanta),” Joyce wrote. “She loves football but she loves the spirit squad the most — mainly because her grandson is with them. Our son is from Atlanta, and we have certainly fallen in love with Ole Miss as a family. Mimi finally got to see her grandson perform in person, and with a huge smile — which we don’t often see much these days — Hotty Toddy’ed with the best of the fans sitting nearby.
“She doesn’t recall the score or mistakes or hits or interceptions this morning, but we remind her that our boys won — and she got to see her grandson perform in person. It was a precious and sweet moment. She probably won’t be there to conceptualize these moments much longer. But for one night, she was the Rebels biggest fan in Atlanta.”
But last week, Mimi made her first appearance in the Grove for a home football game, and her relatives had a tough time getting her to leave.
Joyce is a Georgia alum, but she and her family have learned to love the Grove experience and the Rebels.
“I’ve been to almost every SEC school there is. I’ve been to all the tailgating,” Joyce said. “This is unique. This is unlike anything else, and until someone comes and experiences it, you can’t understand.”

Her son Dewey and his wife Joyce took her to meet Rebel the Black Bear and some of the cheerleaders by the stadium before the game, and as soon as the meet-and-greet ended, Mimi was ready to get back in the Grove with the Rebel faithful.
Though Mimi is a tiny little lady at 4’9″, her enthusiasm for Ole Miss and the Grove is unparalleled. Though the family is from Atlanta, her grandson Candler opted to be the first to attend Ole Miss and became a member of the Ole Miss spirit squad.
“I’ve been to a lot of different things. I went to school in Chicago (at Northwestern University),” Mimi said. “I’ve been here and there and all over the country. Never have I been to something like this.”
Joyce said she and her family is estatic about the attention Mimi has gotten in the past few weeks, but she also isn’t surprised by the outpouring of love.
“This is Rebel nation,” Joyce said.