Hollingsworth: Baptist Memorial Hospital a Helping Hand for those in Need

Recruitment week is finally over, and soon begins the stress of midterms and swap season. With no adequate rest, classes start to pick up in full swing the week after rush, and the balancing act between making good grades and social obligations is a hard task for even the most seasoned student. HottyToddy.com staff writer Miller Hollingsworth tells of the unfortunate accumulation of stresses that led her to the ER at Baptist Memorial Hospital last week. 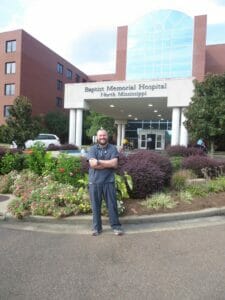 Exhausted from rush week, I decided to take a well-deserved nap on Monday afternoon. I had been feeling pretty ill from sinuses and the “Sorority Infection” that was unavoidable in each house during the past week with hundreds of girls coming and going every night. After waking up from my four-hour nap, I had an unbearable fit of coughing. I couldn’t get my breath at all.
I have a history of cough-variant asthma, which is characterized by a dry, non-productive cough. It is triggered by allergens and illnesses, and makes it very hard for me to breathe, resulting in a coughing attack that can last for several minutes. Feeling very uncomfortable, I quickly went to Urgent Care in Oxford. The nurses, seeing the state I was in, immediately took me to the Emergency Center at Baptist Memorial Hospital. I was having a full-blown asthma attack.
The nurses at the ER assigned me to a doctor immediately, who gave me a series of treatments to get my breathing regulated again. The staff at Baptist was so helpful and attentive. They seemed truly concerned about what I was going through and quickly and efficiently did everything in their power to get me well again. To say the least, I was terrified, but the employees at Baptist gave me a sense of calm.
My best friend, Olivia Schroeder, came to the hospital as quickly as she could when she heard about what was happening to me. I was still having trouble breathing properly, but knowing that she was there made me feel better. After the round of breathing treatments, I slowly became stable again.
I was overwhelmed by the concern of the doctors and nurses at Baptist. The staff could have easily dismissed me, but I was never without a doctor at arm’s length, and all of them seemed genuinely worried about me. I wasn’t allowed to leave until they were sure that I could make it through the rest of the night on my own, and they immediately prescribed me several medicines to take until I felt well again.
To all students not feeling their best, be it from stress, exhaustion, or simply the change of weather, I encourage you not to ignore your systems. This time of year causes sickness for a lot of people, and it is so important to take care of your health. Be attentive to how you’re feeling, and don’t dismiss your symptoms, because oftentimes a common cold can develop into something much more, like what happened to me.
Through this experience, I was reminded of how grateful I am to be a part of such a caring community because thankfully, the city of Oxford is full of great doctors who care about the university students and Oxonians.
Miller Hollingsworth is a HottyToddy.com staff reporter and can be reached at mmhollin@go.olemiss.edu.