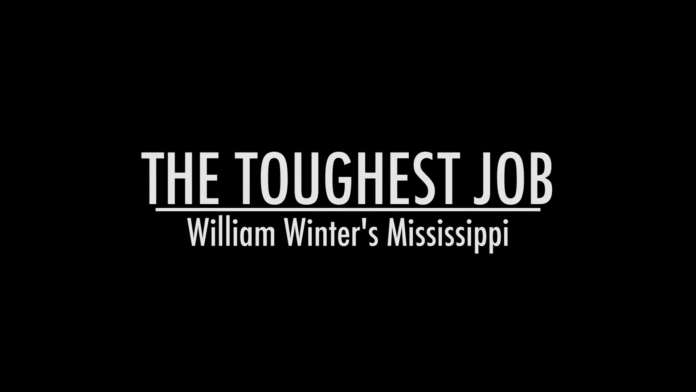 “The Toughest Job,” a new documentary that follows the long political career of former Mississippi Gov. William Winter will have its Oxford premiere next Tuesday, Oct. 7, at 5 :30 p.m. at the Overby Center for Southern Journalism and Politics on the University of Mississippi campus. View the Trailer here:

The Toughest Job: William Winter’s Mississippi Trailer from The Southern Documentary Project on Vimeo.
Mississippi Public Broadcasting will air the premiere statewide broadcast of the film tonight, Oct. 2, at 8 p.m.
MPB will also host a community screening tonight in the courtyard at MPB. A public reception with Gov. Winter in attendance will begin at 6 p.m., with the premier of the film at 7 p.m.
The film, which lasts an hour, is the product of the university’s Southern Documentary Project and was directed by Matthew Graves. It includes archival footage as well as recent interviews with many leaders who dealt with Winter, including former President Bill Clinton, Sen. Thad Cochran (who defeated Winter in a race for a Senate seat in 1984), former Gov. Ray Mabus, the influential Washington insider Vernon Jordan and other civil rights champions such as Myrlie Evers. Mississippi historian David Sansing has a prominent voice, along with other academics, legislators, journalists and political consultants.
Following the screening of the documentary, Winter will take part in a discussion with David Crews, Andy Mullins and Charles Overby — three close friends who played major roles in the success of his landmark initiative while governor – the passage of the Education Reform Act of 1982 that extended kindergarten to public schools in the state.
The program is free and open to the public. Special arrangements have been made with university officials to provide free parking for guests in the lot next to the Overby Center.
“In an age of shrillness, Winter was never shrill,” said Crew, who produced the documentary. “In an age of gridlock, Winter showed how to get big initiatives accomplished. Politically adroit, he knew when to play hardball and when to compromise. Driven by results, he reached out to both friends and opponents to forge coalitions.”
A Grenada native, Winter burst onto the political scene in Mississippi when he was elected to the legislature while still a University of Mississippi law student shortly after returning from service in World War II. He quickly challenged the entrenched legislative leadership – and lost. He was elected state tax collector, an office he worked to abolish; then he was elected state treasurer. But he was beaten in two campaigns for governor. “He often stumbled,” Crews recalled. In 1975, Winter won election as lieutenant governor in 1975 and finally claimed the governor’s office in the 1979 election.
At a time when the state was still unsettled in the years after the civil rights movement, Winter emerged as one of the leading forces for racial reconciliation. He served on President Clinton’s Commission on Race. That led to the creation of the William Winter Institute for Racial Reconciliation on the University of Mississippi campus. Former state Supreme Court justice Reuben Anderson, one of the earliest African-American students at the university’s law school, recently hailed Winter as “the greatest living Mississippian.”
At 91, Winter is still active in state and national affairs.
HottyToddy.com staff report.