Game Birds: The Turners' Legacy at University of Mississippi

This is part of an ongoing series about Ole Miss fans who travel religiously to support the Rebels.


This past weekend was magical for all of us. For Jon Turner it was yet another reason to be a proud Rebel with red and blue blood going back four generations.
Jon Turner’s family has loved Ole Miss since before the Great Depression. They expressed their love in helping the university campus improve and expand.
His great-grandfather O.J. Turner, Sr. of Belzoni, a druggist, farmer and lumber mill owner, was on the State Building Commission. He arranged for money to improve the football playing field “that wouldn’t drain properly” in 1930 for his son Thomas N. Turner who played on the football team in 1929. Since then in the Ole Miss annuals (yearbooks) and the media referenced to the field as “Turner Field.” There is also a plaque just outside of the stadium honoring Mr. Turner and the naming of the track and field. He and others on the State Building Commission were responsible for several other buildings on university campus, all noted with appropriate plaques.
His son, Thomas, later became the president of the State College Board (IHL). He was instrumental in allocating funds for the Turner Center in the 1970s and a student recreation center still in use on campus. Thomas’ nephew and O.J Turner’s grandson was born in 1930, O.J. Turner III. This was Jon’s father.
O.J. Turner III also played football, and he played under legendary Coach Johnny Vaught in the late 1940s in his first year coaching the Rebels. A farmer for many years in Belzoni, he is still healthy and retired in Oxford at 84 years of age. He moved to Oxford from Jackson at after marrying Sammie Pickering Malone on his 81st birthday. they built a home there last year. His brothers, Jon’s uncles, Tab and Jack also were athletes at Ole Miss in baseball and football.

Jon Turner went to the University of Mississippi also. “Well, I was born into a fourth generation Ole Miss family and (my wife) into a second generation family. We really had no choice,” Turner said, “We were indoctrinated — brainwashed — from a very early age that there was only one special place that we should go to college and that was Ole Miss!”
He graduated from the university in 1978 with a B.B.A. degree. He is a partner of BKD, LLP – CPAs and Advisors, among the nation’s 15 largest CPA firms. He co-founded the Rebel Club of Jackson in 1982. He later was “honored to serve” as National Alumni President of the Ole Miss Alumni Association in 2005. He is a member of the University of Mississippi Foundation Board of Directors where he chairs the audit committee. He also serves on the university’s Patterson School of Accountancy Professional Advisory Council. He is also active as advisor to Kappa Alpha fraternity at UM, and to the statewide province as well.
Like the previous Turners he too served his university well with love that passed on to his children.
“Both of our daughters gained degrees at Ole Miss.” Turner said, “So Ole Miss is a part of who we are. It is a strong piece of our family fabric.”
Jon, and his wife Pam, have a condo with a nice next-door neighbor: The University of Mississippi. It is a short walk from the Gertrude C. Ford Center, so the Turners only have to walk across the parking lot, the bridge and then the four-way intersection to arrive at the Grove. The Square is only a five minute walk away. They have stayed in that condo for game weekends, and many other times, in Oxford, visiting since 1999. The hunt for the condo was hard. The Turners searched for a year for a good location. One Sunday they were ready to head home when they came across construction on 401 Tyler Avenue. They wrote down a number from the sign and contacted Rodney Chamblee of Jackson who offered one of the interior units. 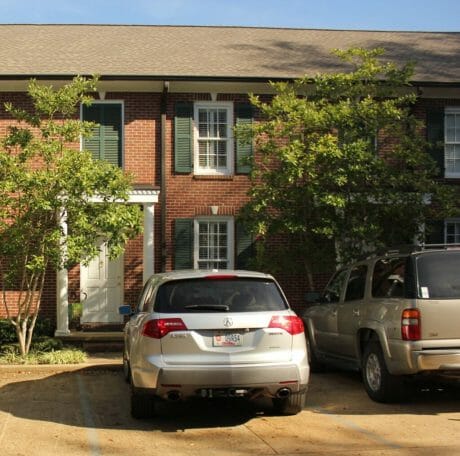 “We thought we were crazy buying a second home just two plus hours from Jackson.” Turner said, “But I was convinced that this was a special place we called Ole Miss and Oxford was going to draw nostalgic Ole Miss alumni in many years to come who would prefer a place to come to for relaxation and later retirement where they had great memories, and continue to do so with visits for ball games and other events.”
They see Ole Miss as a home base for so many of families and friends who can depend on gathering and having a good time all year, every year.
The Turners lucked out during the Eli Manning real estate rise, and have heard offers for much more than what they paid for the condo. “It’s nothing special size-wise, but it is a terrific location. We can park our car on a Thursday or Friday, and not crank it until we go home on Sunday,” said Turner.
They don’t pack much because they keep their Grove attire at the condo. With that said, Pam doesn’t like to wear the same dress twice and will shop for the right red or blue outfit most weeks. They also try to get reservations at their favorite local restaurants Friday night, or Saturday night if it is a day game. “Of course you have to get those ahead of time,” said Turner.
Pam also cooks a lot of good food and the Turners share their meals at the condo as family and friends come and go. She worked at Mississippi Research and Development Center in Jackson while catering for 20 years as she raised their children. “She and her partners really were go-to caterers in Jackson,” said Turner. When the daughters were in high school she slowed down to enjoy their high school and college years while working in sales and marketing at Everyday Gardener in Fondren for over 12 years. Turner remarked she was rather talented at that. Pam is now retired and happy to enjoy the family and Ole Miss.


They enjoy relaxing in their home away from home, where we met the morning of the Ole Miss /Bama game on Oct. 4th. The condo was sunlit as College Gameday provided background ambiance while Jon and Pam’s son-in-law, Sean Kiely, opened the balcony door for the Turners’ first grandson, Milo. Milo’s mother is Raney-Mills Turner Kiely who graduated from University of Mississippi in 2005. She worked for Study Abroad at UM before earning a masters in art therapy at Lesley University. She came downstairs in time to see Milo swinging out on the balcony. The Kielys live in the French Quarter of New Orleans, and they aren’t the only Kielys in the condo.
Sean’s parents, Brian and Peggy Kiely, made the trip from Connecticut to love on their newly-turned one year old grandson. Raney-Mills said, “Milo turned one last weekend but this weekend we have both sets of grandparents together so we thought why not?” There is a small cake with a green dragon on it on the counter, ready for Milo to enjoy. Brian and Peggy Kiely have never been to a SEC game, let alone an Ole Miss game.
“We’ve heard a lot about Ole Miss, especially when our son got married.” Peggy Kiely said, “I’ve always wanted to see the Grove that everyone always talked about.”
“We’re taking them to a few friends’ places in the Grove,” Turner said, “including Game Day ESPN!”


The Turners used to be a part of a tent group for many years when their daughters were matriculating through the University of Mississippi. This tent group included 15 Jackson families. When he served as Alumni president they were responsible for hosting the President’s Suite at the Inn at Ole Miss for a couple of years as Vice President, then President on game day. With the term completed, they elected not to join back into a tent group, but rather enjoy game days as Grove nomads. They enjoy moving from tent to tent to see their families and friends, never forgetting to stop by the Presidential Suite every time for the food, drink and fellowship.
Some of the tents they planned to visit were their daughter’s Mary-Crosby and Walker Roberts tent. “This is a Turner family tent, organized by Turner’s uncles, Jack and Tab and brother Jay and their families,” Turner said. “We also visit Pam’s extended family tent, and generally make the rounds as much as the crowds allow.”
And then, of course, the entire Ole Miss family made their way to the historic game at the Vaught to see their beloved Rebels beat Alabama!
Callie Daniels is the staff reporter for HottyToddy.com. You can email her about this story at callie.daniels@hottytoddy.com.
Facebook
Twitter
Pinterest
Previous articleEvidence Reveals Ole Miss Named for Train, Not Antebellum Reference
Next articleHenry: Bi-Polar A/C Disorder Runs Hot and Cold