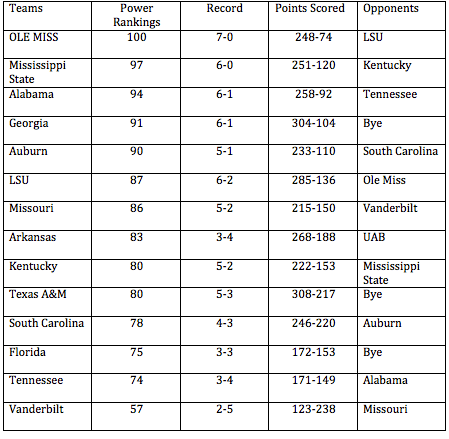 We’ll start this week with a trivia question: What does Ole Miss’ victories over the Tennessee three-step (Vanderbilt; Memphis; Tennessee) have in common? None of the Tennessee trifecta was able to score a TD…each got 3 points! Ole Miss now must go back on the road to face a much improved LSU team as the Rebs find themselves the only SEC team with seven wins!
The speculation is mounting that MSU’s coach is headed to Florida. Whether this is true or not, the distraction is not working in State’s favor. Getting up for Kentucky won’t be easy either.


Alabama is looking like they want to be considered for the “final four” and if they win out going 11-1, who could leave them out? Georgia will be playing the SEC west winner in Atlanta with the winner almost a “certainty” to go to the big dance.
Auburn remains a stumbling block to everyone who must face them as does LSU. The balance of the league looks weaker and weaker with each passing week. The bottom four feeders in the Rankings this week are all eastern teams….speaking as to how the “east was lost”.
Returning to Ole Miss…what a woodshed beating they placed on Tennessee! UT’s worst defeat this year was ugly to watch as the Rebs took apart the Vol offense. There were so many stars on the Rebel side of the ball, however, Wallace, Golson, Nkemdiche and Haynes all could be candidates for SEC Player of the Week. Sanders and Ingram as well! I believe even if Coach Freeze had put the Black Bear in, he could have sacked the Tennessee quarterback.
Now to Week Number Nine! The big game is Ole Miss at LSU which is going to be exciting and possibly Ole Miss’ last big road test of the season. It’s “Home Sweet Home” in Oxford for 3 out of the final 4 where we’re 4-0 presently for 2014!

Steve Vassallo is a HottyToddy.com contributor. Steve writes on Ole Miss athletics, Oxford business, politics and other subjects. He is an Ole Miss grad and former radio announcer for the basketball team. In addition, he is a certified economic and community developer and currently, a highly successful leader in the real estate business with Premier Properties of Oxford. Steve’s lifelong dream has been to live in Oxford full-time. “I am now living my dream daily as is my wife Rosie, who works with the Oxford Chamber of Commerce,” Steve said. You can contact Steve at sovassallo@gmail.com or call him at 985-852-7745.
Facebook
Twitter
Pinterest
Previous articleGolson Avoids Trip-Up from UT Assistant
Next articleHomecoming Parade: Colorful Floats and Rebel Spirit