Located in the heart of the Mississippi Delta is a place dear to my heart, Hollandale. It is home to about 4,000 people and covering a whopping 2.2 square miles, Hollandale is surrounded by 14 small communities and miles of farm land, and it is known for birthing many Mississippi Blues musicians.
Named after a local doctor, Dr. Holland, the city was founded in 1890. Past the rows of delta snow (cotton), soy beans, wheat, and corn there is a history in my hometown that adds to the rich culture of the famous Mississippi Delta.

If you are ever in Hollandale you can ride down Church Street and you will find the house of Mississippi State Senator, Eugene “Buck” Clark. Senator Clark has served as a state senator for 10 years and lives in one of the beautiful historic homes on Church Street. Ride on down the street and you will find a string of churches on both sides of street with farm land creeping in between houses.
Beyond the farm land, Hollandale has a Mississippi Blues Trail marker. Once known for the Blue Front, a strip of cafes in town, Hollandale has birthed famous blues musicians such as Sam Chatom, Willie Warren, Eddie “Guitar Slim” Jones, James Earl “Blue” Franklin, and the Buckhanna Brothers. 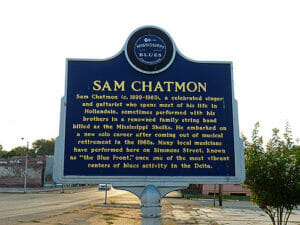 If you are on Washington Street, not far down the road from Sunflower Grocery, you will pass our City Drug Store and stumble across the Blues Trial Marker with Sam Chatom’s name running across it. He was born in 1928 and grew up in Hollandale. Chatom’s family picked cotton, but after work they were known as the Mississippi Shieks String Band. Chatom learned how to play the guitar and the fiddle, and in the 1960s he brought fame to Hollandale when he started traveling around the country singing the blues.
After you leave the old Blue Front, keep going straight and cross the railroad tracks. Right across the tracks you will see a “Blue Devils” sign welcoming you to Simmons High School and T.R. Sanders Elementary School. My mother, Vickie, taught fourth grade at the elementary school when I was growing up. One thing about living in a small town of 2.2 square miles and your mother being a teacher is that almost every child she once taught recognizes my entire family when we go grocery shopping due to the pictures of us she placed on her desk. Former students even remember special recognitions that me or my brother received because she was so excited and expressed her excitement to her class. The school has come a long way since it was founded in 1891.
Over 123 years ago, a one-room school house was built one year later after Hollandale was founded. Emery Peter Simmons founded the school and helped build a larger brick school in 1923, known now as Simmons High School. The elementary school, T.R. Sanders Elementary, is named after another notable Hollandale resident. Thomas Roosevelt Sanders was an administrator at Simmons for 33 years, and a few years ago the elementary renamed itself in his honor for his years of dedication. 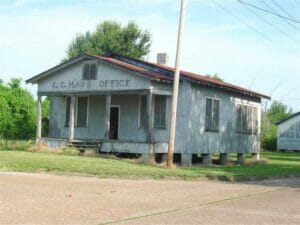 Travel back towards the railroad tracks, past the blues trail marker, and you will be on Old Highway 61 that runs through the middle of Hollandale. U.S. Route 61, as it is formally known as, is a historic route that runs from New Orleans to Wyoming, Minn. A new part of the highway was constructed in recent years that runs along the outskirts of Hollandale, but stay on the historic route through Hollandale and you will pass my neighborhood, Twin County Power Electric Association, a post office, a tax office, and Lee’s Hardware Store.
Twin County Electric Power Association and Guaranty Bank, the only bank in town, are two businesses that help bring people from surrounding communities to Hollandale. My dad, Gene, is a lineman and a supervisor at TCEPA and travels all around the delta managing crews that work on high voltage power lines to bring citizens electricity. TCEPA has four offices across the delta in Belzoni, Rolling Fork, and Greenville with its main office in Hollandale. Guaranty Bank has a chain of banks across dozens of Mississippi cities, including one close to Oxford in Batesville.
The Mississippi Delta is known for its rich conservation of wildlife. Thousands of hunters and fisherman travel down south every year to go on guided hunts in hopes of finding white-tail deer or big bass fish. 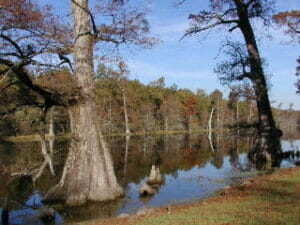 If you travel down Old Highway 61 to the outskirts of Hollandale you will probably see deer stands on the edges of just about every field, or residents hanging their fishing poles off the nearby bridges. You can probably even hire my brother, Shelton, to be your personal hunting and fishing guide. Shelton is homeschooled and after his day of school work is done he walks down to Deer Creek to do some afternoon fishing. Deer Creek passes through five delta counties including Bolivar, Washington, Sharkey, Issaquena, and Warren counties. The creek runs through the middle of the city just like Old Highway 61. If you want to do some hunting go out to Darlove, one of the 14 surrounding communities. During deer season you might find my brother and many other residents riding their ATV’s to their special hunting spot, and they will not come out until the sun goes down or until they have found that white-tailed deer I mentioned earlier.
Some might think Hollandale sounds just like other Mississippi small towns with its agriculture, its school history, and its blues site, but Hollandale stands out to me because it is my home. Being a working college student, I do not get go back home very much. Telling you all about my hometown has brought some great memories back to my mind. Hollandale may be small, but it adds to the rich and colorful history of the great state of Mississippi. From Hollandale, I came to Ole Miss and moved into the Oxford community. I am blessed that this new school and new town has welcomed me so graciously, and I make sure to tell the people from Hollandale of your kindness. Hotty Toddy!
Emily Newton is a HottyToddy.com staff reporter and can be reached at esnewto1@go.olemiss.edu.