Do you believe in miracles? Do you believe in getting older? Mike Eruzione turned 60 over the weekend. Mike scored the winning goal in the 4-3 win over the Soviets on February 22nd 1980. The win literally brought America together again. I never will forget the teacher at my school slamming the desk saying we had to watch the game that night on TV and how it was good vs evil, communism vs democracy. I lived in Mississippi where I was a 12th grader. We didn’t know a blue line from a clothes line, but we watched, and we went crazy when Eruzione scored. Two days later after Team USA beat Finland for the gold, I remember there being three times as many people at Sunday evening church at North Oxford Baptist. That team did that to us. There has never been anything like it since. 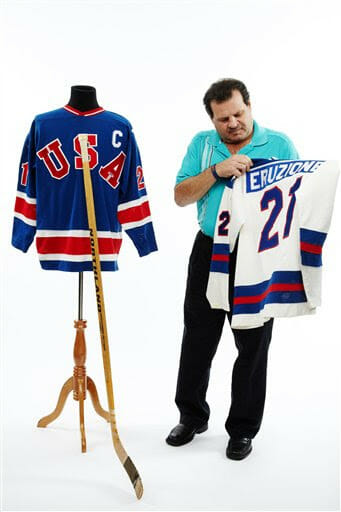 How things can change in life. When Team USA played the Swedes in the first game of the Lake Placid Olympics there were 3000 empty seats in the 7700 seat arena and just a few media. The players were completely unknown. Less than two weeks later, after they had gone 4-0-1 to reach the medal round, 50 million watched the USA-Soviet game on ABC and 11,000 crammed into the arena, almost 4000 over capacity. New York state troopers stood with arms locked not allowing anyone else in – ticket or not – after the game had started.
Mike Eruzione went from a bridge painter who had been playing minor league hockey with Toledo to a national hero after his goal vs the invincible Soviets and the gold medal two days later when the US beat Finland. The day after the Olympics IBM signed him to a $30,000 deal to speak to their people (this was 1980 money). That was more than his father Jeep had ever made in a year working at a sewage plant. He was on Hollywood Squares. He was on the Mike Douglas show. He made an appearance with Danny Thomas.
In Tim Wendel’s book ‘Going for the Gold’ Eruzione says, “I think it’s funny for a guy from Winthrop, Massachusetts to go from complete obscurity to being a national hero and speaking all over the United States.” 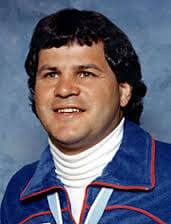 They had a parade for him in his hometown. Thousands of dollars of damage were done to the Rolls Royce he was riding in as so many people tried to get close to him and touch him. He and his teammates had given America reason to believe again. The nation was at its lowest point of self esteem ever, with the baggage of the 70’s and the Iran hostages, Soviet invasion of Afghanistan, tanked economy, and long gas lines having demoralized a nation.
Three and a half decades later, Eruzione still gets mail everyday and is still in demand as a speaker. That is because their story is timeless and fascinating. As I have developed my 1 man play/motivational talk version of it I firmly feel that after people really learn their story that there is nothing they can’t overcome and nothing they can’t accomplish!
Welch Packaging brought me in for the second time last week to speak to more of their people about lessons we can learn from the Miracle of 1980. Regarding Eruzione, I shared how he had grown up in a home near Boston with not much money but a lot of love. As a 7 year old, they had no money for hockey skates so he started with his sister’s figure skates that had bells on them. They had no money to join a rink so he learned to play on the ice inside sand traps on golf courses and on frozen tennis courts.
Their story is so compelling because we relate to where they came from in life. Mike’s mother Helen supervised the cafeteria and girls bathroom at the local high school. She saved S and H green stamps so Mike could have real skates. Jeep worked nights at Santarpio’s pizza joint and his tip money went to those skates.
Mike worked relentlessly out in the cold winters to become a good skater. He would come home and his grandmother would open the oven to thaw out his feet. THAT kind of dedication leads to Olympic gold and THAT is what so many people need to hear today.
Eruzione was an incredible leader. He knew the other 19 players on that roster had been stars and often captains of their college teams. He didn’t lead like a dictator, but often sought their input. He was always positive and upbeat. After Team USA got slaughtered by the Soviets in an exhibition game in Madison Square Garden three days before the Olympics, it was Eruzione that built everyone back up during the six hour bus trip from New York City to Lake Placid.
And it was him that scored the biggest goal, touchdown, basket or run in the history of sports in America. No other team or individual in any sports has done nearly as much for a country as those boys. With ten minutes to go in the semi final against the Soviets, the score was 3-3. Mark Pavlich, who had endured tragedy three years before when he accidently shot and killed his best friend Ricky Holger in a high school hunting attack, passed the puck to Eruzione before getting crunched by two Soviets. Off his wrong foot, Eruzione fired the puck into the net creating a crowd noise that journalists say was seismic. The foundation of the restaurant across the street shook.
His goal was symbolic in that he shot it off his wrong foot. To me, that is like one of us feeling it is not time to start that new challenge, or go back to school because we are not set up right in life. Eruzione was not set up, but he saw an opening and a Soviet defender in front of their goalie. Scoring against them was incredibly hard, and he knew this was their chance. The goalie lost view of the puck briefly and then it was in the back of the net.

These players came from families that were characters! Jeep had shown up for the game that afternoon with a six pack. He told state troopers at the door his son was captain. They said take the beer in. His glasses had fallen off during the game so he didn’t see his boy so well when he scored.
His mom said Hail Mary’s more times than she could remember over the final ten minutes, as the boys held off the relentless Soviets to win 4-3.
And so now Eruzione is 60, a grandpa several times over. He never left Winthrop and has been an in demand speaker for close to 35 years. Like many of the other players, he believes what they did was not so much a miracle but the result of hard work, commitment to team, loving one another, embracing the change of the new system Herb put in, and unwaivering faith.
USA Today named his goal in the 4-3 win as the most significant moment in United States sports history, because it transcended sports to an incredible degree:
“Do you ever notice how the “where were you when that happened” question is most often asked of infamous circumstances? The Kennedy assassination. The Challenger explosion. The OJ verdict. 9/11. The deaths of Elvis, Michael Jackson or John Lennon. Great feats can be collectively shared (like the moon landing) but we tend to bond over the tragedies. But ask anyone of a certain age and they’ll tell you exactly where they were when they heard Team USA stunned the Soviet Union in the Olympic hockey semifinal. No sporting event in American history united the country more than the Miracle on Ice. No sporting event ever will again.” USA Today
As I continue to deliver my 1 man play/motivational talk version of their story I find myself fascinated by how it all happened. It was NOT a miracle, but the result of a genius Herb Brooks pulling greatness out of them. It was a result of a group of people coming to love each other, their incredible work ethic, faith, and refusal to give up. They trailed in six of the seven Olympic games.
Everyone needs to really hear their story. I firmly believe once you do, there is nothing you cannot overcome or nothing you cannot accomplish.
Mike Eruzione and that team showed us so. They did so and he did so because he believed in miracles. He had faith. Out of Boston University, Eruzione did not sign with the NHL and played minor hockey for four years until age 25, with the belief that he could make Team USA in 1980 and that they could accomplish great things. He retired from hockey after Lake Placid, saying nothing in the pro’s could match winning gold.

Powerful video on what if Eruzione had not had the faith….