October 30, 2014
0
1180
Last week, I spent some quality time in Nashville with one of my best friends, Norbert Putnam.
For those unfamiliar with Norbert, he lived here in Cleveland back in 2005 and 2006 and he is the one who put the Delta Music Institute together at Delta State. The “DMI” is a recording program for those interested in learning how to work in a recording studio and to gain an understanding of recording records and even recording music for film.
Norbert is a giant in the music business. He is mostly known as a record producer having produced hits for Jimmy Buffett (“Margaritaville”), and other major records that established the popularity of Joan Baez, Dan Fogelberg, Donovan, John Hiatt, J.J. Cale, the Flying Burrito Brothers, New Riders of the Purple Sage, and many others. However, before he became a record producer, Norbert was a longtime session musician in Nashville playing bass on records by Elvis Presley, Roy Orbison, Al Hirt, Henry Mancini, Linda Ronstadt, J.J. Cale, Tony Joe White, the Nitty Gritty Dirt Band, Michael Card, Bobby Goldsboro, and hundreds of others.
Norbert knows or has met everyone who is anyone in the record business. In fact, when the Beatles first came to America, Norbert and his band opened up for them in Washington, D.C. From that encounter, he became a lifelong friend of Beatle, George Harrison.
A memory I’ll always have of Norbert was when my sons were in their mid-teens and Norbert was staying with us for few a days.
“Tell the boys about knowing Elvis and what it was like knowing ‘The King,’” I said as we all sat in our kitchen talking.

“Elvis was a wonderful person in every sense of the word,” said Norbert. “Elvis was a gigantic figure. He was a lot of fun, a very giving person, and he acted like a regular guy. Of course, we all know that he was not a regular person.
“When I recorded with him at Graceland, you could hear his jewelry jingling long before you could see him coming down the stairs from his bedroom. Elvis never wanted to record until late at night, although all of us musicians were required to be at Graceland at 7:00 in the evening.”
“Tell the boys about knowing the Beatles,” I followed up.
“I never really knew John Lennon,” said Norbert. “However, I did know Paul McCartney and George Harrison very well. Several years ago when I was in a recording studio out in California, Paul was recording down the hallway in another room and asked to see me. I walked down the hall and into his recording area. Paul immediately stopped playing, gave me a big hug, and we visited for about an hour talking about old times.”
“Late one night while I was visiting George in his home in England, he said, ‘Norbert, tell me about making all of those records in Muscle Shoals,’ and I said, George, I will if you tell me some Beatles’ secrets that no one knows. He did and we traded stories back and forth all night.”
“What were his secrets,” I asked. “George said the Beatles were really Paul’s backing band, that Paul was the true leader of the Beatles.”
Norbert has just written a book about his life that will soon be released. I read a draft and it is excellent.
Every now and then you run into one of those unique individuals who has had an extraordinary life and that is Norbert. I’m honored to know him and thankful he spent a couple of years here in my town of Cleveland establishing the Delta Music Institute, which is a huge asset to Delta State University and the Mississippi Delta. 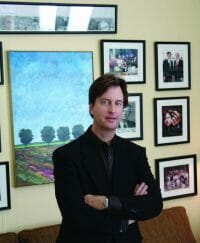 Scott Coopwood, a seventh generation Deltan, lives in Cleveland, Mississippi, with his wife Cindy and their three children. Scott is the publisher and owner of Delta Magazine, one of the South’s leading lifestyle publications, the Delta Business Journal, the first business publication in the Mississippi Delta; and Cleveland’s weekly newspaper, The Cleveland Current .
Facebook
Twitter
Pinterest
Previous articleArts Council Invites Artists to Be Part of Ornament Auction
Next articleWingstop Offers Finger-Lickin-Good Chicken, Sauces