Ole Miss sophomore defensive tackle Robert Nkemdiche is one of 12 semifinalists for the 2014 Rotary Lombardi Award, which is given annually to college football’s best lineman, offense or defense. 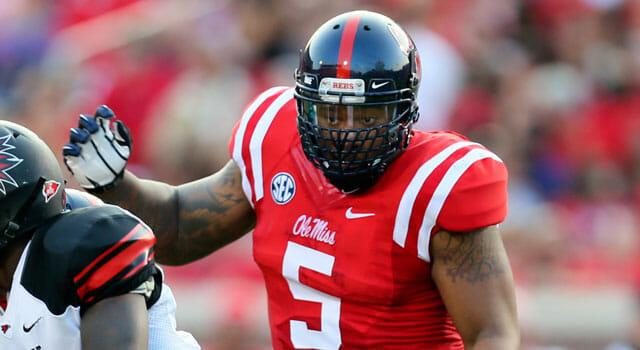 Nkemdiche has been a force for the Rebels’ defense, which ranks No. 1 in the nation allowing just 13.2 points per game. His influence is much greater than the stats would indicate (22 tackles, 2 sacks, 2 TFLs in nine games). His constant pressure on quarterbacks and running backs has helped Ole Miss rank second nationally with 25 turnovers forced and tied for first with 18 interceptions. He is constantly double and triple-teamed by opponents, leaving other Rebels open for big plays behind the line of scrimmage.
A native of Loganville, Georgia, Nkemdiche was named Midseason All-America and All-SEC by several media outlets. He has appeared on watch lists for the Bednarik Award, Nagurski Trophy and Outland Trophy.
The 45th Rotary Lombardi Award ceremony will be held December 10, 2014, at Bayou Music Center in Houston, Texas. The semifinalists were announced by the Rotary Club of Houston at NRG Stadium.
The Rotary Lombardi Award is a member of the National College Football Awards Association (NCFAA). The NCFAA was founded in 1997 as a coalition of the major collegiate football awards to protect, preserve and enhance the integrity, influence and prestige of the game’s predominant awards. The NCFAA encourages professionalism and the highest standards for the administration of its member awards and the selection of their candidates and recipients. For more information, visit the association’s official Web site, www.NCFAA.org.
Follow Ole Miss Football on Twitter and Facebook, in addition to OleMissSports.com.
Courtesy of Ole Miss Sports Information