The picture below is of little Jimmy Craig at the beginning of his dream to be in the Olympics one day. 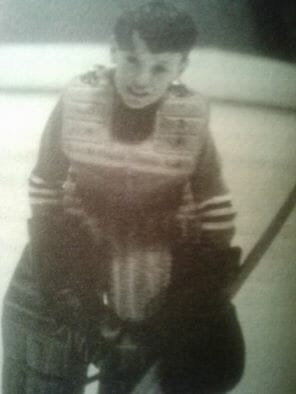 Jim Craig’s family didn’t have enough money to get him a hockey chest protector when he was little, so he made do with a baseball catcher’s protector for awhile. He borrowed skates and put cardboard in them to fill the space.
Growing up in a home of 8 brothers and sisters and 1 bathroom near Boston, Jim had a dream of being in the Olympics one day. In 7th grade his teacher asked him what he was writing over and over. He said he was practicing his autograph for when he got to the Olympics.
His mother, Margaret, drove him to practice against older boys in nearby Boston when he was a 5’1″ middle schooler. She sharpened his skates and told him even small people make the Olympics.
As a 5’5″ 10th grader he kept working, practicing blocking hundreds of shots after practice. No major colleges wanted him so he played a year at a Massachusetts Community College. Boston University saw him and was interested but told him they had a veteran goalie and a star freshman coming in. He told them he had seen them both and they were good but that he was better.
He grew to 6’1″ and as a junior led Boston University to the National Championship. His mother became sick, though, and died of cancer. She made him promise to get his degree and if he had the chance to play in the Olympics. She said she would leave him her strength for when he needed it most.
Herb Brooks built the 1980 Miracle on Ice team not with the best players in the country but with the right ones. Experts had 5 goalies rated above Craig, but Herb saw the fire within and went with him every second of the Olympics. On Feb. 22, 1980 – George Washington’s birthday and the 30 year anniversary of the Disney movie ‘Cinderella’ – against a Soviet team many feel was the greatest hockey team ever assembled, Jim and his mother’s strength stopped 36 of 39 shots in the 4-3 win. Author Wayne Coffey said it was arguably the greatest performance under pressure in the annals of Olympic history and that it forever redefined the parameters of athletic possibility.
When Jim’s mom died a couple of years before those Olympics, his dad Donald was understandably distraught over her loss. He would never move her clothes from the closet the rest of his life. Donald lost his job as a junior college food manager about the time Team USA started its 7 month training stretch for Lake Placid in July of 1979. Each player was given a monthly stipend, mainly for apartments near their base in Minnesota. Jim Craig instead sent his money home to his dad who was raising the other Craig kids as
a single parent. Jim moved in with Team USA doctor George ‘Doc’ Nagobads and his wife Velda and lived in their basement rent free. Missing his mother terribly, Jim would sit up many nights after practice with Doc and Velda talking about life.
Jim Craig was all about family. 40 million Americans were watching on ABC when Team USA beat Finland for the gold medal two days after that historic win over the mighty Soviets. TV viewers saw Jim going around the ice afterwards asking the crowd where his father was. 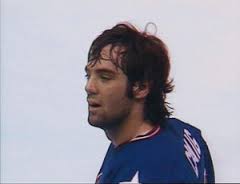 Donald had switched seats before the game and Jim did not know that.
After the Olympics the Craig house got thousands and thousands of letters and at least 50 phone calls a day. America was a mess in 1980, with the economy in awful shape, American hostages in Iran, Soviets in Afghanistan, and much more. One person wrote “I was ashamed of being an American. My pride was eroded. When the team won and you said, ‘Where’s my father?’ I broke down and cried. Thank you for letting me see the good side of my country again. Thank you for making me be proud to be an American again.”
Another man wrote: “I am the father of four children. My only hope is that when my children reach Jim’s age that our relationship will be so strong that that when they yearn for companionship either during suffering or celebration that they will still cherish their relationship with their parents. Your son has provided us with an inspiring example for fathers everywhere.”
One of the biggest points I try to get across in this new Talk is that the Miracle on Ice was not a miracle, but earned, and that every company, school and church organization out there is capable of amazing things if they follow their fascinating template. In his book Gold Medal Strategies goalie Jim Craig opens with this:
“Miracles are inspiring; they give us hope, support the notion that all is possible, and are the stuff of high level drama. What we accomplished on that sheet of ice in that village in the Adirondacks in upstate New York was all of that. But it was not a miracle – even if I believe in them. Highly improbable? Yep. Astounding? Maybe. Shocking? You could say that.
But not a miracle.
What we accomplished at Lake Placid was the result of a lot of hard work – and a lot of smart work. It was the result of exceptional and brilliant mentorship. It was the result of sublime execution and poise in competition. It was the result of one of the best demonstrations of team chemistry in history.” – Jim Craig, goalie, Team USA 1980
He then shares insights on their make up:
“If you look at the makeup of the team, and go into the formative years of each player and each coach, you will discover a history rich with caring parents and supportive mentors. You will find virtues and strong community. What you won’t find is a lot of money, luxury, indulgence, or downtime.
This upbringing was just the right clay and raw material from which could be molded and constructed a team that would work and sacrifice enough, would be tough enough, would have enough confidence, would not collapse under setback and defeat, which would have just enough respect for authority, and be just open and receptive enough to coaching and mentoring (while never sacrificing our edge and spirit), to take on the world and set a standard for overachievement.” – Jim Craig, goalie, 1980 Miracle on Ice team

Charlie Adams is the author of four books on positive attitude and peak performance, including 2013′s “How to Build a Positive Attitude and KEEP the Darn Thing!!” and “Stoke the Fire Within.” His books and motivational keynotes and seminars are designed to make sure events reach their objectives and to help create winning cultures. Email him at Charlie@stokethefirewithin.com.