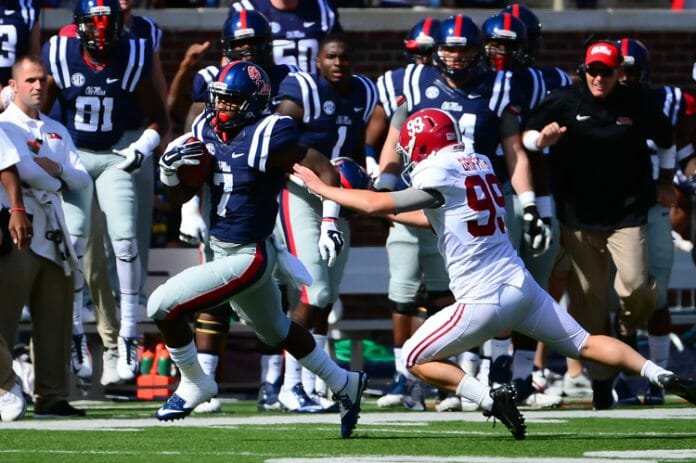 When No. 11 Ole Miss take the gridiron Saturday morning to face the Presbyterian Blue Hose, the Rebels will be down a top offensive playmaker and scoring threat in sophomore wide receiver Laquon Treadwell, who in the past two seasons has given trouble to opponents’ defensive scheme with his playmaking ability.
Presbyterian has faced two other FBS opponents this season in Northern Illinois and North Carolina State, and in those two games, they lost by the margin of 97-3.
Quarterback Bo Wallace played lights out against Auburn last Saturday, finding his receivers and putting the ball where it need to be to give his team the opportunity to win. Wallace is only 261 yards of total offense away from passing Eli Manning’s record of 4,369 yards.
With Treadwell down for the remainder of the season, the Ole Miss receiving tree will add Qunicy Adeboyejo, Markell Pack and Derek Jones into the mix of Vince Sanders, Evan Engram and Cody Core.
In the past few non-conference matches, the Rebels have put up a lot of points and thrown for a lot of yardage, while the Landshark defense only holds its opponents to 10 or less points a game.
Fans should see coach Hugh Freeze and staff play a lot of players in some key snaps as the final weeks of the 2014 regular season draw to a close, then a chance at the third straight bowl game in Freeze’s first three years is in the future.
Adam Brown is HottyToddy.com sports editor and can be reached at adam.brown@hottytoddy.com.