Picking Up the Pieces: Presbyterian at Ole Miss 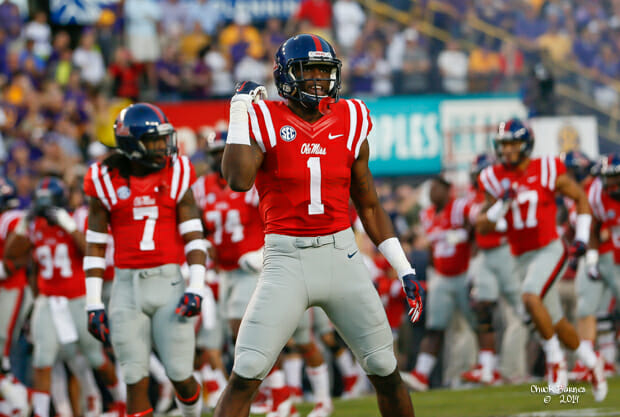 Even for the best teams and players, all good things unfortunately come to an end. Some runs last longer than others.
Of course, it’s hard to swallow when things transpired the way they did against Auburn at home last Saturday. We have definitely suffered some tremendous losses — not just on the scoreboard, but also on our roster. I heard a musician say once that nothing gold can stay. It’s not an easy thing to stay on the top; it’s a lonely place to be.
Despite it all, we as a Rebel Nation have to realize that we can’t dwell on what transpired, nor can we dwell on what has been lost. We still have games to win and monuments to climb. Though we all wish the winning streak could have lasted just one more game, coach Hugh Freeze and the boys have given us a hell of season that we thought we might never see.
Dust off your shoulders — it’s another week and a new game. Presbyterian College marks our last non-conference game for the Rebels and a chance to get back in the groove at home.
The Rebels still could have the winningest season in programs history and the chance to spoil State’s run at the championship in a few weeks after Arkansas. A lot of scenarios will begin to unfold in the last few weeks of the season. What’s important is this week’s match against the Presbyterian Blue Hose.
It’s looking like a favorable odds table for the Rebels this week as they take on the Blue Hose. As of Thursday, the Rebels are the favorites (naturally) with a line for the Rebels -45.5.
This game is more than numbers or stomping the Blue Hose to regain some self confidence. Instead, it is about restructuring the team without Laquon Treadwell and Denzel Nkemdiche and building on what they have. It won’t be easy, but it is possible to have a strong finish without the offenses favorite target and a strong defensive lineman.
This is what picking up the pieces is about in a game like football — no one likes to see their brother go down in battle, but what the rest of the Rebels know is that they have to regroup because that is what they want to see in spite of injuries. These are the seasons I like to see where everyone plays for something more, and we get to see some amazing things unfold in front of our eyes that we probably may not see again in our lifetime for some.
The key this week is going to be on the offensive side of the ball and creating a new identity without Treadwell. It’s not something we anticipated this season, but that is the reality the Rebels face in the next few weeks.
It won’t be easy for the Rebels, and we are going to see them offensively take a step back overall in what they will be able to do effectively. Hugh is going to have to focus on basic and effective. We are going to have to finds ways to execute in the air and in the ground.
It’s not like we don’t have potential and explosive kids we know can make plays for us. Veteran quarterback Bo Wallace will find some new targets to hit amid the Rebel offense like Cody Core, Vince Sanders, Quincy Adeboyejo and Evan Engram, who have combined to catch 102 passes for 1,551 yards and 13 touchdowns so far this season, averaging 11 catches for 172 yards and more than a touchdown per game. Though they have not had to be at the center for the entire season like Treadwell, it doesn’t mean they aren’t ready to make things happen.
This is why recruit and build depth. If we teams, especially in the SEC, could depend soley on a few players or even just one, things would be a whole lot different. That is silly to think that just because we hear a few names time and time again that those are the only guys we have out there to make an impact and win ball games.
The Rebels have a lot of players, especially on offense, who have been waiting in the wings to show you what they bring to the table, and there is no better time than the present to see it transpire. Maybe we will finally get to see a run game emerge with this dynamic change.
Let’s stand by our Rebels united this weekend, and I’ll see y’all in the Vaught for an early 11 a.m. call to take on the Blue Hose.
Lee Ann Herring-Olvedo is a HottyToddy.com contributor, veteran SEC sports journalist and Brown University graduate. She loves good cigars, good games and a smooth glass of bourbon — not necessarily in that order.