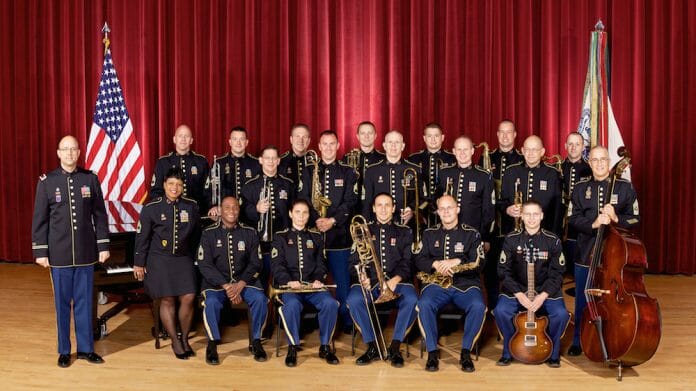 The official touring band of the United States Army will perform a free concert Friday (Nov. 14) at the Gertrude C. Ford Center for the Performing Arts as part of Military Appreciation Month.
The Jazz Ambassadors offer a little something for everyone. The band’s repertoire includes swing, bebop, Latin, contemporary jazz, standards, popular tunes, Dixieland, vocals and, of course, patriotic music. The band’s members wrote many of the musical pieces that they perform.
“We are always happy to welcome the military bands to the Ford Center,” said Norm Easterbrook, Ford Center director. “For this concert, we were able to work with the band to focus the concert on music from the 1940s as a complement to the UM Common Reading Experience book ‘The Girls of Atomic City.’”
The Jazz Ambassadors have performed in all 50 states and several countries with notable performances at the Toronto Jazz Festival and the Kennedy Center, and even had an appearance on the “Colbert Report.”
Free tickets are available at the UM Box Office, inside the Ole Miss Student Union.