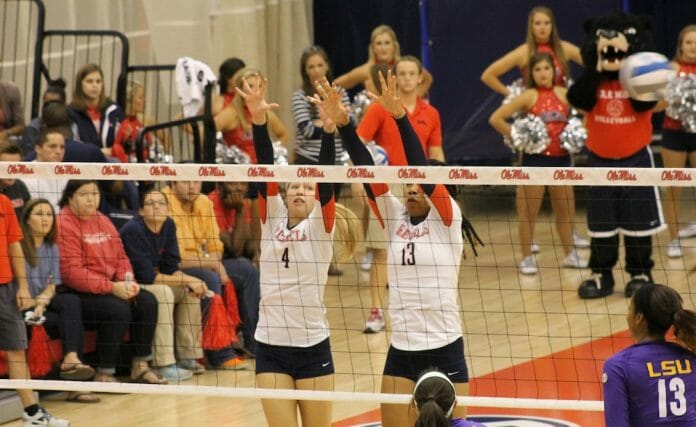 The Ole Miss Volleyball team returns to the court this evening to play host to the No. 15 Kentucky Wildcats into the Gillom Center where the Rebels hold a 10-1 record at home.
Last week, Ole Miss (20-6, 6-6) spilt the week with a 3-0 win against Mississippi State and a 3-1 loss to Texas A&M both matches where on the road.
Coach Steven McRoberts squad is led by junior Nakeyta Clair who hit .492 on the week with 4.38 kills per set. She has now hit above .300 in 21 of 26 matches, including 14 above .400, adding five blocks on the week. Clair became the second player in school history in the rally scoring era to reach 300 career blocks along with sophomore setter Aubrey Edie who set a career-high 62 assist against Mississippi State to set the single match record in the rally scoring era and then set the single season record Sunday at Texas A&M with 53 assists.
Kentucky is coming into Oxford with a 22-4 overall record and 14-2 mark in the SEC this season. The Wildcats are 2-0 after the weekend, defeating Georgia and Missouri. Lauren O’Conner leads Kentucky with 3.43 kills per set.
On the upcoming match against the Wildcats, McRoberts gave his thoughts on what they’ve prepared for with Kentucky.
“Kentucky is very good team, they are a balanced team. It will definitely be a challenge for us,” McRoberts said. “We went 2-1 in our last three matches, but we had too many errors, which hurt us against Texas A&M. For us to have a chance against Kentucky, we have to cut down on our errors.”
The Rebels will finish the weekend on the road with a match against the Missouri Tigers on Sunday.
Come out and support the Rebels tonight at 6:30 as they go up against No. 15 Kentucky!
Adam Brown is HottyToddy.com sports editor and can be reached at adam.brown@hottytoddy.com.