Putting the 'Giving' Back in Thanksgiving in Abbeville

Thanksgiving is right around the corner, and with it come all the wonderful delights of the upcoming holiday season. From the delicious food to fun times with family and friends, there’s nothing like getting together to celebrate the blessings of the season.
But what happens to those individuals who, for one reason or another, may be displaced or have no family to share Thanksgiving with? No tempting smells coming from a bustling kitchen, no old western on the TV that someone’s uncle just had to see one more time and no warm and fuzzy feelings to share with a chubby-cheeked little one dragging a toy around the house. What about those people? Where do they go for Thanksgiving?

Katie Tidwell South has an open invitation for anybody who doesn’t have food or family to share the Thanksgiving holiday with. South owns a large building on the corner of Business 7 N. and Long Street in Abbeville. The structure has housed more than one restaurant in the past and will sort of do so again on Thanksgiving Day and the day after. The difference is all the meals served on those two days will be free to anyone who needs them or has no one to spend the holiday with.
“I’ve lived in Abbeville all of my life,” South said. “And this is just something that David and I wanted to do.”
David is David Parker, South’s partner, both in this endeavor and in life. She and Parker have been together a little over seven years. Parker’s failing health and a recent stay in the hospital for minor heart surgery served as part of the motivation behind the Thanksgiving community meal idea. 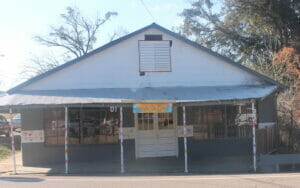 “Everybody needs somebody,” South said. “And we’ve certainly been blessed. We’ve had so much support and prayer throughout our family and the community that we just felt like doing this might show how much we appreciate all the love and support that we’ve gotten. And it’s just sad to think that there might be someone out there who doesn’t have anyone to spend Thanksgiving with.”
South said the original Thanksgiving plan started out like it did most years: dinner at their house for any of their family members who could make it. But then another idea began to form.
“We began to think about the fact that the old restaurant building was just sitting here empty,” South said. “And we had all the space anyone could possibly need, a complete kitchen that while it hadn’t been used in a while, it certainly could be, after a thorough cleaning, which we’ve been doing all week, and the fact that there were a lot of people out there who probably had nowhere to go for Thanksgiving dinner and no one to spend it with. So, we thought why don’t we try and fix that for as many folks who want to come.”
South said the community meal was also a blessing for her and Parker as well.
“This has given David and me something to focus on,” she said, “something that might mean more than just offering a meal to someone. And we’re looking forward to it too.”

South plans on being open early Thanksgiving morning and the day after to serve hot coffee and sausage and biscuits to anyone who’d like to stop by. The meals will be available all day long and evening, with no plans to go home until people stop showing up. She and Parker provided all the food and will be doing most of the cooking, with a lot of help from family and friends.
“I don’t know what I would have done without my family,” she said. “My sister, Virginia McGregor, has helped me clean until we both can’t stand up. And my brother and his wife, Jerry and Elizabeth Tidwell, have been great. They have been here to help us no matter what. Jerry is by David’s side helping him with everything. David can barely use his hands anymore because of arthritis and he tells Jerry how he wants things done. He’s David’s hands. And his wife Elizabeth is going to be here to clean and cook, wash dishes or anything else she needs to do. They are both a blessing to us and we are so very thankful for them. I had another family member bake a tremendous amount of sweet potato pies too. Everyone has just been great.”
The Thanksgiving Day (and the day after) menu will include:

“And a bevy of desserts,” South said.
South said she invites anyone to come who has no one to spend the holiday with and to know the welcome is sincere.
“Truly, anyone can come who has no family or no food to prepare for the holiday,” she said. “Please come and enjoy the day with us. I even invited the folks at our Abbeville Dollar General that have to work Thanksgiving and the day after to come down and eat their lunch here. We’ll have movies, music and lots of food and fellowship.”
The address is: 01 Business 7 North, Abbeville.
Angela Rogalski is a HottyToddy.com staff reporter and can be reached at angela.rogalski@hottytoddy.com.