Adams: Team So Strong, They Felt Each Other in their Cells

Audiences have reacted to my new Talk on how the Miracle on Ice happened with stunned disbelief as the whole story of how they did it, is like a fairy tale that actually happened.
To understand the magnitude of what they did in beating the juggernaut Soviets 4-3, which is the greatest upset in sports history, it is important to understand the massive commitment the Soviets put on hockey as a way of propaganda for communism. The Soviets had won the gold medal in 1964, 1968, 1972 and 1976, outscoring opponents 175 to 44. They had outscored American teams along the way 28-7.
In 1979 the Soviet team came over and crushed the National Hockey League All Stars 6-0 using their backup goalie.
They were Darth Vaders on ice, unemotional soldiers of what Ronald Reagan would later call the Evil Empire. It is wrong to think of them as just great athletes. They were a level above, magicians on ice. They were Piccaso’s. They were Beethhoven’s. Their style of play was spellbinding. 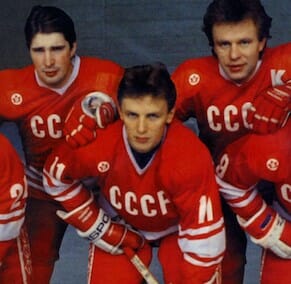 The Soviet Union would begin to recognize talent in youngsters around age 7. Players like Slava Fetisov who like many, lived with his family and 2 others in a 400 square foot home. So restricted, he would constantly go outside for space, where ice rinks awaited. There would be signs all over reading ‘Real men play hockey. Cowards do not.’ This led to thousands taking it up as tykes, and those that stood out would be put into sports classes. At around 10 or 11 they would be placed in a special school for rigorous training. By 15 the elite ones would join the Junior National hockey team and around 20 the best of the best would join the National Team, the one that was going around the world pulverizing anyone in their way.
Soviet hockey players saw their wives and children 30 days a year. They trained 11 months a year, 3 times a day. Vladisav Tretiak, their brilliant goalie, said that he trained every day for 23 straight years, including his wedding day.
Gabe Polsky has directed a 2015 documentary Red Army that will be a leading contender for an Oscar. 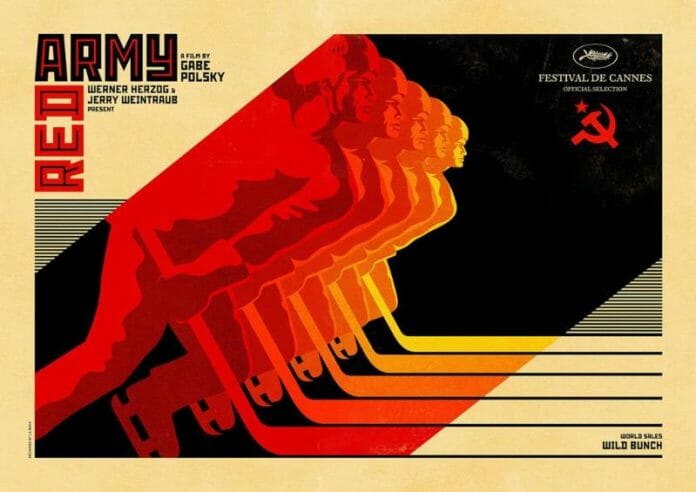 Polsky says the Soviets approached it not just from a scientific point of view, but philosophically. Their training borrowed from dance, chess, literature, circus, painting, art. It was not just about winning and losing; it was artistry, a beautiful religious experience.
He says they revolutionized sport to a whole new creative level. They were a finely tuned symphony with their passing, weaving an improvisation. Their passing was like artistic tapestry.
They were a sight to behold, skating in great intersecting arcs, winding and unwinding like a Swiss timepiece.
Slava Fetisov, one of their best players, said they were so in sync that they felt each other in their cells! It was if they knew each other so well out there that they could almost play blindfolded.
Their coach, Viktor Tikhonov, was a dictator. Andrei Khomutov’s father was going to die. The player went to Tikhonov and asked him if he could visit his father on his deathbed. Tikhonov said no, that he could not miss the next practice.
Fetisov, years after the Miracle on Ice, yearned to play in the NHL. Tikhonov had him captured by police, handcuffed to a car battery and beaten until 4 a.m.
If they did not crush you with their hockey skills, they would with their conditioning. They trained by riding 1960 style 1 gear bikes up hills. They would do jumping pushups over and over on a long swooping jump rope. They were the best conditioned team of any sport in the world.
A few years ago the six greatest hockey players of all time were named. Four of the six were on the 1980 Soviet team. Historians have said none of the 20 U.S. players would have made their team, yet these kids found a way to beat them.
David vs Goliath.
The Soviet team featured Helmut Balderis, known as Elechtrika, perhaps the fastest skater in the world.
Valeri Vasiliev. When he hit the puck with his stick, it sounded like gunfire.
Valeri Kharlamov. He was a poet on ice. He liked to score “beautiful goals.”
Vladimir Krutov. At 5’9 and 195 pounds of zero body fat, he was called “the Tank.” He would go through you or around, you, whichever necessary.
Vladimir Petrov. His arms were like blacksmiths.
Vladimir Golikov. His mouth was filled with steel teeth.
Slava Fetisov. So fast on skates he could skate backwards faster than most mortals could forwards. An asteroid was named after him.
Vladisav Tretiak. The greatest goalie in history. When they wrote his biography years later, the title was “The Legend.” As a young boy Tretiak carried a tennis ball everywhere he went and bounced it off all angles to sharpen his hand eye coordination. If he allowed one goal in practice he put himself through hundreds of leg lunges afterwards. With his back against one tree and he legs against another close tree he would go up and down. His arms and legs were like spiders.
They would stride into arena with their long coats and long hats and Slavic features. They would don their bright red uniforms with the ominous CCCP on the front. They would come at teams in a constant circling motion of skating, like sharks around an isolated swimmer. They would methodically take opponents apart.
This was a time when the Olympics were made of amateur athletes. The Soviets were amateur in name only. They were given ‘titles’ such as engineer or soldier but they were full time hockey players. Canada became so frustrated in the 1970’s that they skipped an Olympics.
How scary were the Soviets? Scarier than the flying monkeys in Wizard of Oz, and that is saying something!
The idea that a bunch of U.S. college kids from humble, barely middle class home could beat them is still hard for me to grasp, and I have studied what happened relentlessly. In the new Talk, I reveal hidden gems will be revealed of how it happened, gems that any company, any school, any church can use to levels before thought unreachable. After you hear it, you will feel there is nothing you as an individual or as a group cannot do, and nothing you cannot overcome.
The New York Times reported earlier this month that audiences at film festivals in New York, Toronto and Savannah have gasped at the symphony-like beauty of the Soviets on ice. Below is documentary producer Gabe Polsky talking about it. While we certainly don’t agree with the communist way of life, their ability to work as a team on ice was spellbinding, as you can see in the link:
click here to view
The Red Army documentary, which is the leading candidate to win Best Doc at the 2015 Oscars, comes out in theaters early this coming year. I will keep you posted on it.
Charlie Adams is the author of four books on positive attitude and peak performance, including 2013′s “How to Build a Positive Attitude and KEEP the Darn Thing!!” and “Stoke the Fire Within.” His books and motivational keynotes and seminars are designed to make sure events reach their objectives and to help create winning cultures. Email him at Charlie@stokethefirewithin.com.