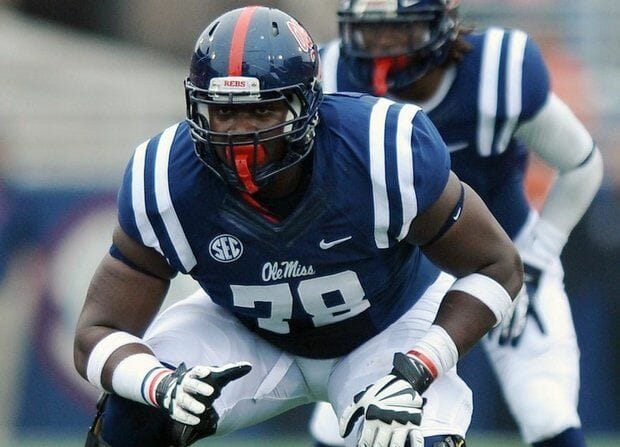 Ole Miss left tackle Laremy Tunsil has been selected to win the second-ever Kent Hull Trophy as the most outstanding college offensive lineman in Mississippi.
Tunsil was named a Midseason All-American by ESPN.com, The Sporting News and Phil Steele, earlier this year. Playing against some of the most athletic defensive ends in college football in the SEC Western Division, the Lake City, Florida, native has given up only one sack in each of his two seasons with the Rebels.
Tunsil will accept the award at the C Spire Conerly Trophy banquet Dec. 2 at the Mississippi Sports Hall of Fame and Museum.
“Laremy is the most athletic offensive lineman I have ever coached,” Ole Miss head coach Hugh Freeze said. “Not only is he a great player, but he is an even better young man. The Hull family can be very confident that he will represent this award in a manner that will make them proud.”
Tunsil was named All-SEC and a freshman first team All-American by multiple outlets last year as a true freshman.
Said Rebel offensive line coach Matt Luke: “We’re honored to have Laremy receive this prestigious trophy. He is an exceptional person and talent, and we know he will represent this award well both on and off the field.”
The trophy is named in honor of the late Kent Hull, the former Mississippi State great who went on to play in four Super Bowls for the Buffalo Bills. Mississippi State’s Gabe Jackson, now with the Oakland Raiders, won the inaugural Hull Trophy.
The Kent Hull Trophy winner is selected by a panel including former college coaches, former NFL coaches and scouts and former college players.
Very limited seating remains for the C Spire Conerly Trophy Banquet, which will be emceed by nationally renowned sportscaster Ron Franklin. Call 601 982-8264 to order tickets.
Courtesy of Ole Miss Sports Information