November 30, 2014
0
803
When you fall in love with someone from a rival alma mater, there will always be a few days a year with a heart torn in two.

Many Mississippians declare undying allegiance to either the University of Mississippi or Mississippi State University, but sometimes a Rebel can’t help but fall for a Bulldog.
Keith and Pam Buck grew up together in Senatobia, then separated for college — Keith chose Starkville while Pam went to Oxford. During a break from graduate school, the two were home for the holidays and decided to take a quick trip to Memphis. From there, the couple divided began dating and soon began their “mixed marriage.”
Throughout the season, Pam said she has pulled for her husband’s Bulldogs (unless their defeat would help the Rebel cause) while Keith has only rooted for Ole Miss when it would benefit State.
“I’ve been to two games in Starkville this year, and I pull for them as long as they’re not playing Ole Miss,” Pam said. “But, if they need to lose to benefit us, I just…don’t say much.”
The Bucks have season tickets for Davis-Wade Stadium in Starkville and made it to the Grove For the Egg Bowl for the first time this season. While they have remained civil throughout both teams’ record-breaking seasons, emotions ran high all week leading up to the big game. 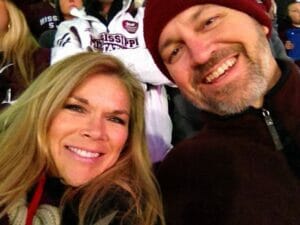 Pam said during their Starkville game trips, she would ditch the Ole Miss garb minus one bracelet to remember her tailgating home in the Grove, which many of her Bulldog friends consider “voodoo.” Though she wears a Hate State pin, it’s tucked under her lapel at their very divided Grove tent.
The Bucks’ two children were raised in the house divided and while one has been swayed to the Mississippi State side, another is less interested in the rivalry.
Fellow mixed marriage couple Brooks and Sharon Gordon is similar but reversed, with Brooks graduating from Ole Miss and Sharon being a Bulldog alum. The two met in Starkville after Brooks moved to the small college town to kick off his restaurant career and never looked back.

The two take the rivalry seriously, jokingly taunting the other with past team failures or Hotty Toddy chants, but their hatred for other SEC West schools gives them a cause to bring them together.
Like the Bucks, the two respect their significant other’s strange choice for school allegiance, but that all comes to a hault when the Egg Bowl is on the line
“We’ve been nice to each other all season long — he’s been rooting for us, I’ve been rooting for them,” Sharon said. “But about a week and a half ago, it all stopped.”
After the couple moved to Colorado, family visited the new home for Thanksgiving. Brooks’ family is filled with diehard Rebels (and a Miss Ole Miss from ’96) and Sharon’s family bleeds maroon and white, so a tape divider was placed on the floor to divide the fans.
“We made people on the fence pick a side, because there’s no crossing over the line,” Sharon said.
The couple’s four dogs sport team paraphernalia for their parents, with two dogs showing Rebel pride and two matching their Bulldog brothers.
All season, the hope was that both Mississippi schools would be strong playoff contenders and would come to Oxford to battle it out for a spot in the Rose or Sugar bowls.
“We held up our end of the bargain,” Keith said en route to Oxford.
“Well, we beat Alabama,” Pam retorted.
The Bucks have a flag pole in their yard with both Ole Miss and Mississippi State flags flying. Each year, the Egg Bowl winner is flown to the top, and the loser sits below until next Thanksgiving. This year, Pam will return home and flip the flags after a year of Bulldog reign.
Though love breaks through the boundaries of any rivalry, the playful jabs and school rivalries never diminish their love for one another — but there will be a lot of Hotty Toddying for the next 364 days from Pam and Brooks.
Amelia Camurati is editor-in-chief of HottyToddy.com and can be reached at amelia.camurati@hottytoddy.com.
Facebook
Twitter
Pinterest
Previous articleEgg Bowl Win Belongs To Rebel Nation
Next articleRebel Women's Basketball Team Claim 2014 Nugget Classic