Cleveland: a Look at Football around Mississippi 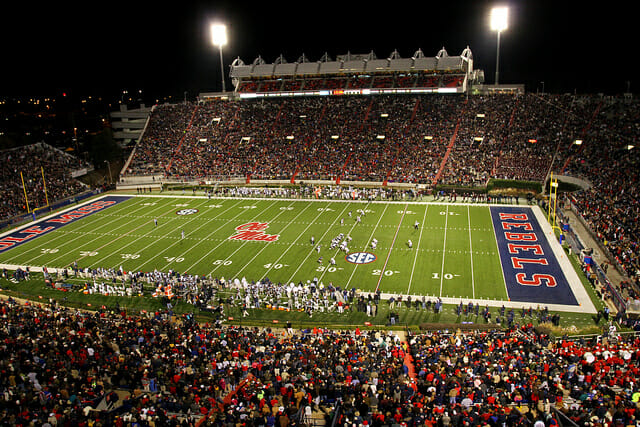 A bunch of little things after a big season in Mississippi college football.
Just when you think the New Orleans Saints are dead, Saint Drew Brees reminds you of why you can never discount them as long as No. 9 wears the Black and Gold. When Brees has any time at all, he makes such difficult throws appear so easy.
Ole Miss Rebel Jaylen Walton’s 91-yard touchdown run against Mississippi State ranks as one of the greatest runs these eyes have witnessed in the Egg Bowl — or any other game. He made a lot of people miss and he ran through tackles like he weighs 196, not 166.
That’s one way of looking at Walton’s run. Count on this: Mississippi State coaches look at it differently, as in, how did that many of our guys miss that guy?
One man’s opinion: State missed more tackles in that one game than the Bulldogs missed in 11 previous.
Interested to see the crowd sizes and what folks think of the MHSAA football championship games moving away from Jackson (and to Starkville) this weekend. As a Jacksonian, I hate to see it. As a realist, I can see the appeal of the renovated, more modern university stadiums and a change of scenery. I still hope Jackson will be part of the rotation, along with Starkville, Oxford and Hattiesburg.
You know what I like most about Oak Grove’s ultra-successful football coach Nevil Barr? I run into him more in bookstores than I do at football stadiums. He reads. A lot.
Hate what appears to be happening to UAB football. The Alabama Board of Trustees has never seemed much interested in UAB being successful at Division I football. The Blazers could have hired Jimbo Fisher years ago if the trustees had signed off on it. They did not. If UAB football does disband, there are several players and coaches who would help other D-I programs. USM coaches might want to camp out there
Just one man’s opinion: Laremy Tunsil appears to these eyes the most talented collegiate offensive lineman in Mississippi history. When he pass blocks, opponents bounce off of him like ping pong balls. He might make more money than any football player to come through here, including guys with names like Favre and Manning.
Don’t know how much stock to put into national reports of Hugh Freeze being high on the list of prospective head coaches at Florida and Dan Mullen being high on Michigan’s list. If I were those other schools, I’d be highly interested in both. They have been immensely successful in Mississippi. Florida and Michigan are two of the most high profile, highest paying jobs in college football. Obviously, you have a better chance to win a national championship at those places than in SEC West. On the other hand, three or four million dollars a year goes a long, long, long way in Oxford and Starkville.
Will Hall, son of highly successful, long-time Mississippi high school coach Bobby Hall, would appear a fast-rising college coaching star. He won big at West Alabama. Now, he’s winning big at West Georgia. Hall’s Wolves are the only team to defeat Delta State this season and they did it twice. Now, West Georgia will play in the NCAA D-II quarterfinals.
To anyone who doubts a small college coach can make the step from D-II to D-I, I would remind that Hugh Freeze spent two years at NAIA Lambuth and one season at Arkansas State before moving to Ole Miss. Wasn’t that big a step for him, was it?
Which brings up this point: How can D-II, with a 36-scholarship limit, play a 16-team tournament to determine its national championship. Meanwhile, the highest level of D-I (with an 85 scholarship limit), restricts its playoffs to four teams so as not to put a physical strain on the student-athlete. One conclusion: Boy, those D-II guys must be like supermen.
[dhr]
Rick Cleveland is executive director of the Mississippi Sports Hall of Fame and Museum and can be reached at rcleveland@msfame.com.