Team Building Insights from one of the Best Ever

Diversity and Team Building are two important topics in corporate America and educational institutions. The Miracle on Ice team nailed those two areas.
They were together from July of 1979 to February of 1980 when they won gold in Lake Placid, New York. Remember, when all this started there was serious divisiveness between the Boston and Minnesota players as well as those from Wisconsin and Michigan.
As November arrived, the bonding of the team grew. Minnesotan Buzz Schneider (while the average age of the team was 21, Buzz and Mike Eruzione were the two old guys at 25) and his wife Gayle threw a get-together at their apartment for the team.
Jack O’Callahan of Boston made a special concoction of punch. Bill Baker of Minnesota made pheasant, figuring the Boston guys might like trying it. Gayle carved up a turkey. They had a great time. The laughs were abundant and boy did they give each other grief. Around midnight, Mark Pavelich got pheasant bones and started firing them at teammates. Bob Suter got some soda and poured it all over the head of team captain Mike Eruzione. 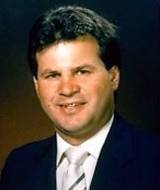 That didn’t exactly go over well as it made his beloved disco shirt all sticky AND revealed his developing bald spot. Mike had brought his sweetie Donna in an effort to impress her around his friends.
He threw a fit and said, “Donna, let’s go. We are outta heah!”
He arrived at practice the next day to be met with a non stop chorus of “Donna, let’s go. We are outta heah!!” He smiled. He would hear that non stop all the way up until the Olympics!
The Minnesota guys took the Boston guys bird hunting. That was a fiasco as the Boston guys didn’t know how to put the shotgun shells in. During an ice fishing trip Buzz Schneider left his pole only to see a fish take the bait and his pole! The players told him he was the only person to ever be caught by a fish. Mike Eruzione showed up to ice fish one day wearing only a wind breaker and a ball cap. “Think you need something warmer?” a Minnesota player asked. “Nah, I’m good,” Mike answered with that Boston confidence. About 30 minutes later he was inquiring of the availability of extra clothing.
When they played an exhibition game against Harvard, Eruzione brought all the guys to his house. The Minnesota players were overwhelmed by how nice the two dozen or so Eruzione’s all through the tri level were to them. Food was everywhere. Extra tables were put in bedrooms. They met so many of his relatives they couldn’t keep them straight.
They did all kinds of things together off the ice, things that bond any company, school or church. They really started to like each other.
As they bonded as a team, every player got a nickname. Backup goalie Steve Janaszak was Janny. Ultra talented player Mark Johnson was Magic Johnson, as a certain basketball player named Magic Johnson was also doing great things in 1979 for the Los Angeles Lakers. Mike Ramsey was Rammer. Bob Suter was Bam Bam for his hard charging style. They gave him a second one, Woody. He was like a wood duck, always bouncing back from adversities such as injuries.
They needled each other incessantly. Rob McLanahan was obsessive about organization, the real type A.

He would get his hockey sticks just right and line them up in perfect order. As he was leaving the locker room, teammate John Harrington would just happen to knock into the sticks, sending them spraying. McLanahan would throw his arms up.
As December arrived, this group of young men that in 2 1/2 months would renew pride in America, continued to get better, and better, and better. Their commitment to team was through the roof. Dave Christian was a prolific scorer in college. Later as a pro, he would score 7 seconds into his first game. But for the Olympics, Herb needed him to change for the best of the team. The Soviets and Czechs would be so relentless in their attack, that he needed faster skaters back on defense. He asked Dave to move positions. Gone would be the glory and fun of scoring a lot. Instead, he would be a protector. He never hesitated and said he would gladly do it for the team.
The bonding became deeper. The team had a Christmas Party with gag presents. Jim Craig was known for constantly talking about his philosophy of playing the goalie position. He opened his present to find jaw breakers and ear plugs. The note read ‘When you decide to go on and on about how much you know about goalie, please put the jaw breakers in your mouth and hand out the ear plugs!’
Mike Eruzione and Eric Strobel were given helmets with lights because they had been crashing into each other on the ice. Ralph Cox and John Harrington were given seat cushions because they been on the bench a lot lately! Jack O’Callahan was given over sized glasses and a cigar because he thought he was Hollywood. Donnie Waddell got Clearasil as he was still battling youth facial issues.
And then came Herb’s gift. The team handed it to him and he removed the wrapping paper to find a long bull whip! He smiled. The players laughed. One player then pulled out a whistle.
“Again!!”
“Again!!”
Everybody laughed, including Herb. They were bringing back the memory of that exhibition game in Norway back in September when Herb, upset with their play, made them skate hard for an hour AFTER the game.

This team got him. They may have never understood him, and they sure didn’t like a lot of the things he did, but they realized he was simply about pulling the greatness out of them and getting the very best out of each and every one of them.
Today, that bull whip is in the museum at the arena in Lake Placid. 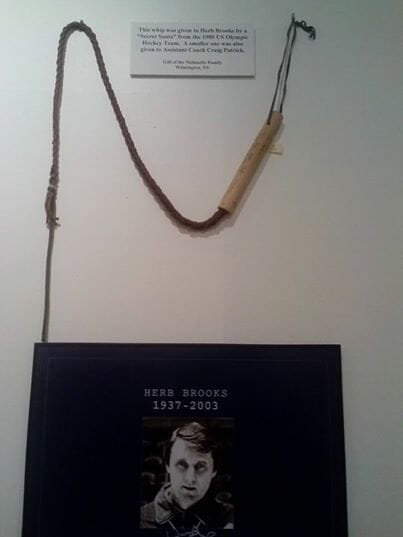 The team loved giving McLanahan grief non stop. Extremely organized and structured, he recoiled when he found out their Christmas tree at the apartment complex was missing. In his world of organization, Christmas was not right without the tree, and this got him all out of whack. The conspirators hid the tree and tormented him daily with clues on the bulletin board. They dropped hints that it was Herb. Yeah, right. If you got a wake up call in a hotel at 3 AM, it was always the work of Dave Christian. Maybe he was the tree thief.
One day McLanahan got word the tree was in a local pond. He ran to the bank to see a tree way out on the ice. It was too thick. He knew better. He would never find the tree though, those rascals.
As the team chemistry grew, 3 particular guys seemed to always work very well together on ice. In hockey, you have shifts where guys go out on ice as a group and skate like made for 45 seconds or a minute and then get off and another shift goes on. Well, Mark Pavelich, John Harrington and Buzz Schneider developed a special chemistry out there. Each was from the Iron Range area of northeastern Minnesota. There the love of hockey is so deep that while the rest of America gets excited around November 20 because of Thanksgiving coming up, the Iron Range people get excited because that’s when the ponds will start freezing over.
Guys like Mark Pavelich grew up skating on ponds, staying out there for hours on end becoming fast and creative. What Herb was doing, with his new fancy style, was “sophisticated pond hockey,” he would say. When Pavelich, Harrington and Schneider were on the ice together, they were mesmerizing. You could make no rhyme or reason of what they were doing, but they darn sure did it. Mike Eruzione once tried to play with them on a shift and left, saying he had no idea what the hell they were doing.
During practice one day the 3 guys were not involved in a drill. Pavelich, a very quiet and reserved fellow, made the comment that all they were doing was moving around cones during that part of practice. The other two took that and ran with it, deciding that the 3 of them should be known as The Coneheads. They loved the Saturday Night Live skit with Dan Akryod and Jane Curtain.
When Herb told them he wanted to use the 3 of them together in shifts, they liked the idea. Assistant coach Craig Patrick was in the office with them and told Herb they were calling themselves The Coneheads.
Herb looked at them like they had 4 heads. He had no idea what Saturday Night Live was or The Coneheads.
Against the Soviets a couple months later, the Coneheads would score Team USA’s first goal.
The Miracle on Ice team was filled with examples of embracing change, diversity, team building, leadership and work ethic. America fell in love with them and wanted to hug their TV sets after seeing them win gold. They took us from a country that was burning flags to one waving flags.