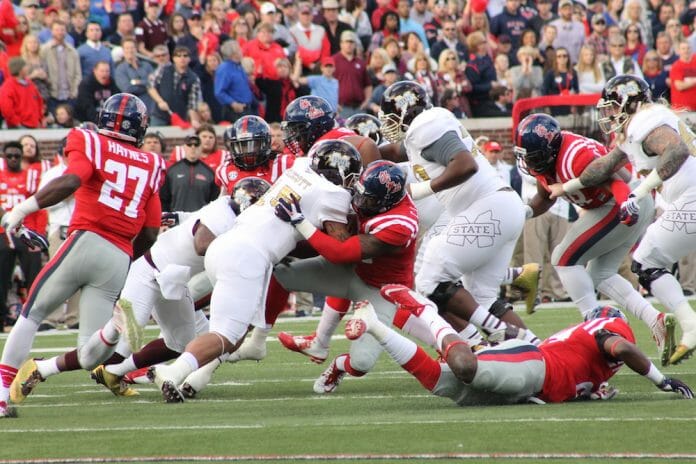 After an inspiring defensive performance in Saturday’s 31-17 win over No. 4 Mississippi State, Ole Miss’ Tony Conner and C.J. Johnson were recognized by the league office in its weekly awards selections.
Conner is the SEC Defensive Player of the Week, while Johnson earned SEC Defensive Lineman of the Week accolades. They helped the Rebels limit Mississippi State to a season low-tying 17 points and pressured the Bulldog backfield all game long with nine tackles for loss and three sacks.
A sophomore from Batesville, Mississippi, Conner had seven tackles and led the Rebels with a career-high 3.0 tackles for loss and a career high-tying 1.0 sack. He also broke up a pass and recorded a quarterback hurry. As the Rebels’ “Huskie” defensive back, he played a key role in both rush and pass defense. He pressured Dak Prescott into an incomplete pass on 2nd-and-goal from the 4-yard line, leading to a turnover on downs two plays later in a crucial fourth-quarter defensive stand.
Johnson, a native of Philadelphia, Mississippi, shared SEC Defensive Lineman of the Week with Kentucky’s Bud Dupree. Johnson posted season bests with six tackles, 1.5 tackles for loss and a sack in the win over the Rebels’ in-state rival. With the Rebels up 24-17 early in the 4th quarter, the junior defensive end sacked Dak Prescott for a 10-yard loss that led to an MSU punt.
Ole Miss finished the regular season with the nation’s No. 1 scoring defense at 13.8 points allowed per game.
In other weekly awards, sophomore Evan Engram was named the National Tight End of the Week by the College Football Performance Awards. He hauled in five catches for a career-high 176 yards (fourth-most in a game in school history) while the filling the void left by injuries to top receivers Laquon Treadwell and Vince Sanders.
Ole Miss (9-3, 5-3 SEC) will find out its bowl destination on Sunday.
Follow Ole Miss Football on Twitter (@OleMissFB) and Facebook (Facebook.com/OleMissFootball), in addition to www.OleMissSports.com.
Courtesy of Ole Miss Sports Information