“They can be very surprising statistics if you really think about it,” said Mack Clements, leader of the new Chi Alpha religious organization at Ole Miss that operates under the Assembly of God church and has around 20-30 members.  “But honestly, I expected those numbers to be low, because as our society has continued to change and evolve, religion has continued to be valued less and less.”

He believes that most of the apathy toward religion is forged during a student’s time at college.

“College is the crucible for most people’s faith,” said Clements.  “It’s mainly the first time for people to decide whether or not to go to church and continue the religion they’ve known.  Some continue to grow and be religious, but some just decide to not go anymore and, in turn, they stop caring.”

Peyton Spear, a senior at Ole Miss from Los Angeles, California and a Christian who attends Campus Crusade for Christ at Ole Miss, agrees.

“College is such a unique time for people.  The freedom can overwhelm some people if they aren’t careful,” said Spear.  “And as for religion, with that freedom, some people just run off  once they’re out from under their parents’ control; they just choose not to practice the religion they practiced growing up.”

Casey Coston is the leader of the Rebels for Christ organization at Ole Miss, which  operates as a non-denominational Christian organization on campus.  He sees apathy for some forms of religion but not for spirituality. 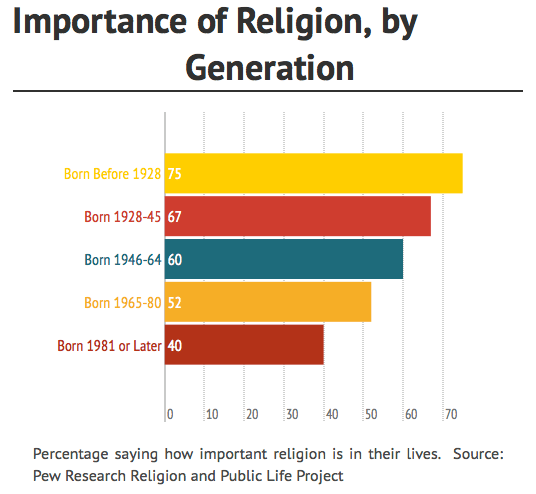 More than  20 religious organizations are available to students at Ole Miss, which isn’t surprising, considering that  a 2013 study released by Gallup.com showed that Mississippi was the most religious state in the U.S.

“My faith is what drives me,” said Kirk DeShazo, a sophomore from Olive Branch and a member of the Baptist Student Union at Ole Miss.  “It’s everything to me.  It’s what helps me make the tough decisions.  I need something to lean on most of the time, and my faith in God is what I lean on.”

Jacob Brown is an Ole Miss senior from Grenada and also a member of the Baptist Student Union.

“With my faith in God and in Jesus, I’ve found forgiveness,” said Brown.  “I also found acceptance in my religion, and I have met others who believe the same things I do and accept me for who I am without judging me.”

The acceptance noted by Brown is one thing that Coston says college students seek, whether or not they are religious.

“They still long for love, community, acceptance, meaning and purpose,” said Coston, who maintains organized religion can still fulfill that longing in people’s lives but that churches must do things differently than in years past to reach people.

Clements said that one-to-one relationships with people, getting to know each person intentionally and putting in effort with them is how people in the church show that religion makes a difference.  Spear has similar thoughts.

“I’m not sure how the numbers turn around, whether it is the church being more open and relational with people or what,” said Spear.  “But I think that it is our job as Christians and religious people to reach others no matter the cost. And that effort will turn the numbers around.”

But Eric Hankins, pastor of First Baptist Church in Oxford, has his own ideas about what will bring people back to church.

“The only thing that seems to work is preaching the Bible as true, holding people accountable and making demands on them. Churches that do this, strangely, tend to grow in the numbers of people who are actually committed,” said Hankins.

“I believe that God is going to do something big,” said Clements. “I don’t know what he will do but for some reason I have a feeling that eventually faith with once again become a foundation in people’s lives again.”

Story contributed by Ole Miss Journalism Student Ethan Turner.   He can be reached at ehturne2@go.olemiss.edu.