Former Reb Kicker Saves Pup in Downpour on I-40

Hoppy Langley has done many wonderful and outstanding things in his life (including making the winning kick to defeat Alabama in 1976), but what he did last week trumped everything in my book.
Driving in a fierce rainstorm on Interstate 40 between Jackson and Memphis, he noticed an injured dog in the median. At first glance, he thought this was one of the most beautiful animals he had ever seen. He drove past until the next exit appeared. Then he immediately made a u-turn and drove back in an attempt to save the 2-year-old German Shepherd’s life at the risk of his own.
Upon arriving at the scene of the injured canine, he dialed 911 when he realized he would need help in moving the pooch to safety. The Shepard was badly injured with a broken hip plus other injuries that would come to the surface later that evening. While Hoppy was waiting for the Tennessee Highway Patrol to arrive, he removed his belt to act as a leash in controlling the dog’s movement. 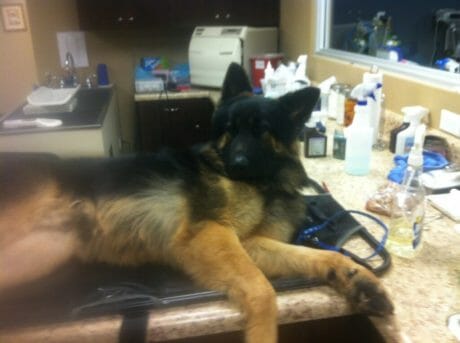 All of this was occurring in the midst of a cold, driving downpour. The Fayette County dispatcher also notified Animal Control upon receiving Hoppy’s call. Once the Highway Patrol Officer arrived on the scene, she immediately sized up the situation and crossed the interstate to save the canine. Once she had the rescued pooch out of harm’s way, she and Hoppy quickly realized that he was not paralyzed because he was wagging his tail and had some movement in his back legs.
What happened following is even a greater Christmas story. Shep, as Hoppy named the German Shepherd in honor of Shepard Smith, was taken to Dr. Glenn Weatherly’s office in Somerville where his condition was assessed. It was not good. According to the the doc, Shep would need surgery by an orthopedic animal surgeon to heal his dislocated hip and broken leg. He would also need a cast for his broken paw that had four fractures.


The good news was he would be able to make a full recovery and live a great life. Shep had made such a lasting impression on both Hoppy and the brave young lady on the Tennessee Highway Patrol, they agreed he had to be saved. Hoppy decided to front the cost of the medical expenses (estimated at several thousand dollars) and the officer would provide Shep a good home.
Without this commitment, the Fayette County Animal Control would have had no option but to euthanize the helpless animal unless someone stepped forward. Hoppy Langley was that individual.
Because Christmas is the season of giving opposed to getting, Hoppy and the officer demonstrated to the world what the true meaning of Christmas really is. Rebel fans, dog lovers and Christians everywhere, we can all participate in this wonderful story by contributing to the animal shelter in honor of the 2-year-old Shep. If donations exceed the medical bills, excess funds will be used to help save other animals in need.
In order to assist, donations can be sent to: Friends of Fayette County Animal Shelter Attn.: Carol Anne Mason — Saving Shep P.O. Box 443 Somerville, TN 38068
Or if you prefer you can donate online.
The easy thing to have done in this situation would have been to keep on driving, not wanting to get your suit wet, and get home to Memphis in time for dinner. Our former great kicker could not do this, but instead did what someone with a big heart and Christian values would do.
I am even more proud today than yesterday to say that I know Hoppy Langley. My only regret is that I do not know the brave young officer, but just maybe some day, I’ll meet her and She” as I remember Christmas 2014 for a special occasion and act of heroism.