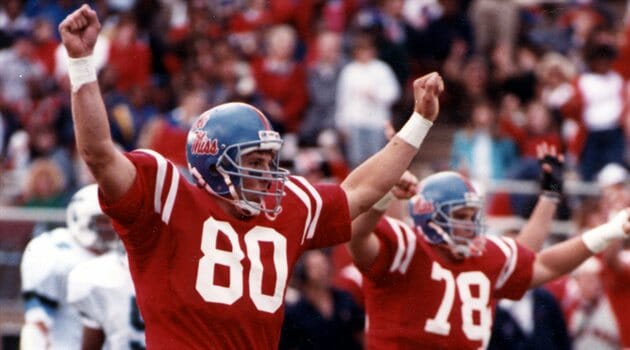 Former Ole Miss All-American Wesley Walls was inducted into the College Football Hall of Fame as part of the 16-member class of 2014 at the 57th National Football Foundation Awards Dinner on Tuesday night at the Waldorf Astoria in New York City.
One of the most acclaimed players in Ole Miss history, Walls received first team All-America honors in 1988 at tight end while also being recognized as an NFF National Scholar-Athlete. He is one of just 29 players in history to be inducted in the College Football Hall of Fame after also having been recognized as an NFF Scholar-Athlete. 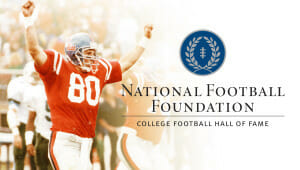 * Kenna was inducted as an Army player; was on the 1941 Ole Miss freshman team with fellow hall of famers Conerly and Poole ** Vann was inducted as a Southern Miss coach; played at Ole Miss from 1926-28 and was captain of the ’28 squad
After playing strictly as a defensive end his first three seasons in Oxford, Walls transformed into a two-way player his senior year when the team needed a tight end. The 1988 team captain amassed 36 receptions for 426 yards and three touchdowns at tight end en route to earning AP first team All-America and All-SEC honors.
As a defensive end, he recorded 140 career tackles, including 19.5 tackles for loss and 5.5 sacks, and he led the Rebels to a win in the 1986 Independence Bowl. One of the most memorable moments of his Rebel career came in the 1988 Alabama game when Ole Miss upset the 12th-ranked Tide 22-12 in Tuscaloosa and did not allow a pass completion all game. Walls had seven catches for 79 yards and a key QB sack in the victory.
An Academic All-America and three-time academic all-conference selection, Walls was chosen as a member of the 1980s All-SEC Team and honored as an SEC Legend in 2007.
Chosen by the San Francisco 49ers in the second round of the 1989 NFL Draft, Walls enjoyed a decorated 15-year NFL career, helping the 49ers win Super Bowl XXIV during his rookie campaign. A five-time Pro Bowl selection and three-time All-Pro selection, he also played for the New Orleans Saints, Carolina Panthers and Green Bay Packers.
Walls currently works as a real estate developer, and he serves as president and CEO of Delta Furniture Manufacturing. Active in the community, he endowed a football scholarship at Ole Miss, and he was inducted into the Ole Miss Sports Hall of Fame in 2005 and the Independence Bowl Hall of Honor in 2001. He received the Distinguished American Award from the Ole Miss chapter of the National Football Foundation in 2009.
Only 948 players and 207 coaches have been inducted into the College Football Hall of Fame from the nearly 5.06 million who have played or coached the game during the past 145 years. In other words, less than two ten-thousandths of one percent (.0002) of the individuals who have played the game have been deemed worthy of this distinction.
Founded in 1947, The National Football Foundation & College Hall of Fame inducted its first class of inductees in 1951. The first class included 32 players and 19 coaches, including Illinois’ Red Grange, Notre Dame’s Knute Rockne, Ole Miss’ Bruiser Kinard and Carlisle’s Jim Thorpe.
This year’s inductees will also be honored at the National Hall of Fame Salute at the Allstate Sugar Bowl in New Orleans on Jan. 1, 2015, and their accomplishments will be forever immortalized in the new $66.5 million College Football Hall of Fame.
2014 College Football Hall of Fame Class