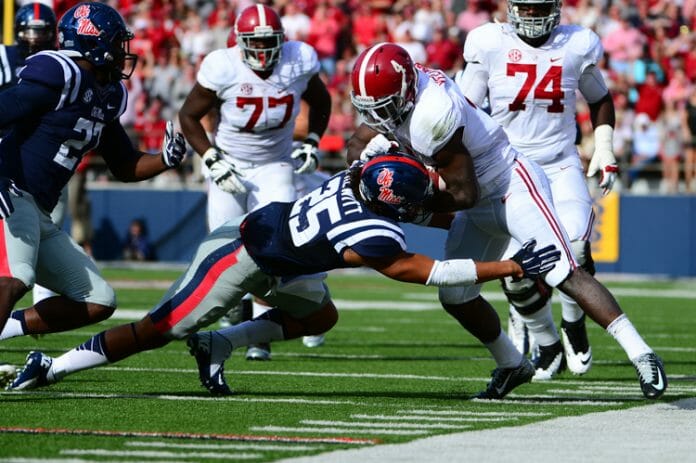 According to the final Sagarin College Football Rankings, Ole Miss received the most difficult opponent of the 12 SEC teams headed to bowls. The good news is that a Rebel victory would elevate the 2014 Ole Miss squad to a level unseen in more than 50 years.
Here’s how the SEC’s 12 bowl opponents are currently rated by Sagarin:
No. 2 — TCU (against Ole Miss, Peach Bowl) No. 3 Ohio State (against Alabama, Sugar Bowl) No. 16 — Georgia Tech (against Mississippi State, Orange Bowl) No. 23 — Wisconsin (against Auburn, Outback Bowl) No. 25 — West Virginia (against Texas A&M, Liberty Bowl) No. 27 — Louisville (against Georgia, Belk Bowl) No. 34 — Minnesota (against Missouri, Citrus Bowl) No. 35 — Notre Dame (against LSU, Music City Bowl) No. 38 — Miami (against South Carolina, Independence Bowl) No. 40 — Texas (against Arkansas, Texas Bowl) No. 44 — Iowa (against Tennessee, TaxSlayer Bowl) No. 64 — East Carolina (against Florida, Birmingham Bowl)