According to a recent article in the Daily Mail, men spend a third more on Christmas presents than women and those guys aged between 30 to 40 years old tend to spend the most.
And while that in itself is a very interesting tidbit, does it, in fact, prove anything at all when it comes to who’s the best shopper at Christmastime, men or women? Well, it might — it just might. Can we say: bargain shoppers?
Journalist and humorist Alan Tyers, who writes for many British publications, including the Daily Telegraph, wrote a recent article for the latter-mentioned publication that referred to a survey of 3,000 people released by multi-media retailer QVC that found 23 percent of men manage to do the bulk of their Christmas shopping in an hour or less – with three percent completing the task in under ten minutes.
And while that might sound impressive if the survey were about how fast men could pick up their dirty socks (come on, you know I’m right), Tyers, being a man himself, wasn’t very proud of his male contemporaries. He suggested that it wasn’t cause for celebration of the male of the species’ efficiency and focus, but rather an indicator of their thoughtlessness.
This journalist won’t go that far, but will admit to her own social media survey on the topic. And granted, the survey seemed a bit one-sided, as more women weighed in on the subject than men, however, it still validated the female consensus that men could learn a thing or two from them when it comes to the art of buying, especially at Christmas.
1. Women are more thoughtful. According to the survey the female gender takes more time when it comes to shopping for the right colors, sizes and styles than men. 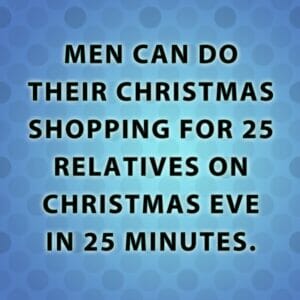 2. Women are bargain hunters. Females will shop around for the best deals and not buy the first thing they stumble over just to get out of the crowds and back home.
3. Women will not wait until 30 minutes before the stores close on Christmas Eve to buy the entire family a Chia Pet because that’s all that’s left on the shelves (yes, my husband did that, God love him). Most women start Christmas shopping the day after last Christmas. It’s just our nature to be prepared.
4. Women will not give money for Christmas gifts. Okay, I’m torn on that one. I see nothing wrong with a card full of green, but that’s just me. Way to go, guys.
5. Women will not take their husbands or boyfriends along and tell them to “pick out what they want.” Sort of defeats the purpose of the “mysterious” gift under the tree scenario we’ve all come to expect this time of year.
6. Women love crowds and shopping in general; men do not. How many Black Fridays do men attend without being dragged along to run interference? (Yeah, my point exactly): as for crowds and the male of the species, refer to reason number 2, please. 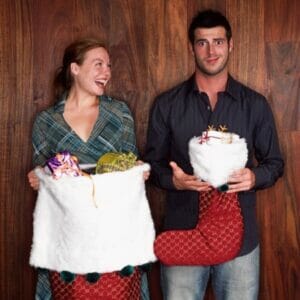 7. Women would never use the cop-out phrase: I have no idea what anyone wants. You always know. Women make it a point to find out what EVERYONE wants, right down to the new baby her third cousin’s sister-in-law had. It’s important to ask and to give something at least remotely wanted by the recipient.
So the top seven reasons are in, and while they may reflect a negative take on the prowess of male shopping at this time of year (or ever), there are certain things that men excel at when it comes to Christmas shopping that women do not and I think it’s only fair to mention them.