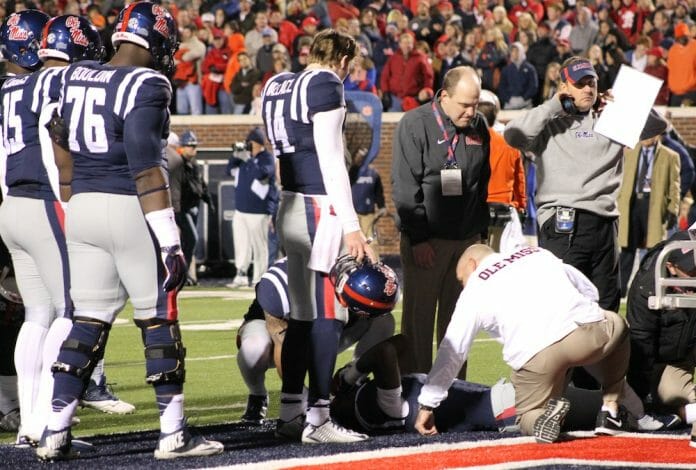 After a brutal loss in the final seconds to Auburn last weekend, an Alabama newspaper opted to slap a gruesome photo of sophomore Laquon Treadwell on their front page with the headline, “Finding a Way.”
Rebel fans and others were outraged by Opelika-Auburn News’s use of the photo, but the newspaper released an editorial soon after defending their decision to run the photo as it was a “one of the most crucial plays” of the night.
However, Ole Miss isn’t satisfied.
Athletics director Ross Bjork wrote a letter to the editor of the newspaper expressing his disappointment with the staff’s editorial choices.
The letter reads:

After careful thought and consideration, I feel compelled to express my disappointment in the way you reported the outcome of the Auburn vs. Ole Miss game. Specifically, the way you sensationalized a moment with a grossly depicted image that affects a young man’s life. Furthermore, your response to criticism from readers could be described as nothing short of digging your heels in. Quite simply and most disappointing, you showed no signs of remorse for the incredible lapse of judgment.
We run our athletics department with a well-defined purpose, and we operate daily using seven core values to guide us. Together, those core values comprise our “line in the sand,” and we will defend them when attacked. It is our belief that your actions are at odds with those of those core values: Student-Athlete Welfare and Social Responsibility. So, it is for that reason that I have written to you.
In closing, we know of no other newspaper that has used such a graphic image of a student-athlete’s injury in such a sensationalist way and sincerely hope you have not created a precedent for this type of crass journalism.
Ross Bjork Director of Athletics University of Mississippi

Though HottyToddy.com and many other news outlets clearly have a photo of the injury that was almost a touchdown, no other has chosen to run the photo, especially not to the magnitude of Opelika-Auburn News.
Amelia Camurati is editor-in-chief of HottyToddy.com and can be reached at amelia.camurati@hottytoddy.com.