Oxford Arts Crawl Prepares to Get Underway for 2015

The Yoknapatawpha Arts Council’s Oxford Arts Crawl is ready to start its 2015 season beginning January 27 – 6 until 8 p.m. The Crawl takes place the fourth Tuesday of each month and runs from January through October every year.

Wayne Andrews is the director of the Yoknapatawpha Arts Council and said the Oxford Arts Crawl is an event of creative fun and entertainment that encompasses many galleries and events all in one evening out.

“We’re in our fourth year of the Oxford Arts Crawl,” Andrews said. “And it’s a partnership between Visit Oxford, the Arts Council, the University Museum and galleries in town. We started this because there are so many opportunities to go see the visual arts in Oxford and there were so many receptions being scheduled on the same nights. So, the conflicts had us all scrambling to get a calendar of events or something together so the occasions didn’t coincide with each other. We brainstormed and figured out if we would just put all the receptions and events on the same day of the week, every month, so that everyone knew when they were, we wouldn’t have all these conflicts in schedules and worrying about which event to highlight; we’d just have them all on the same evening and encourage people to come out to all of the arts’ activities.” 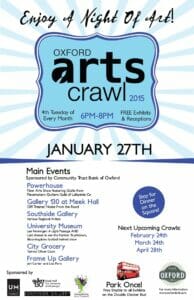 Andrews said all of the events covered are basically in the downtown area and the first Arts Crawl of 2015 will highlight several galleries and local artists.

“In the first one this year, we have the Powerhouse, the Gallery 130, which is in Meek Hall on the Ole Miss campus in the School of Art, Southside Gallery, the University Museum, City Grocery and Frame Up Gallery and they all will have exhibits up. So, you get to see how art is a big part of our community. It’s in our educational facilities, such as the museum, which has the mission of preservation and documenting the artists of our area. People get to see the up and coming and emerging artists through the Powerhouse and the galleries.”

Andrews said through businesses like City Grocery, a person gets to see how they use art to define their sense of community.

“And also how establishments like City Grocery can showcase their own artistic attributes,” Andrews said. “In City Grocery’s case, they are a historic building on the Square, celebrating southern foods and their traditions. Then they’re having southern artists in their space. And we rotate the artists that they showcase often. City Grocery is a great participant and has this, in some respects, as a way of defining what they’re all about.” 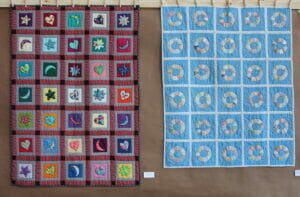 And with the Powerhouse, people can see planned exhibits, such as the exhibit they’re showcasing for January from the Oxford Piecemakers Quilt Guild.

“We have quilts from the Piecemakers Quilt Guild that is an intro into the Fiber Festival which is at the end of January,” Andrews said.

Andrews said often it’s more than just visual arts that are showcased in the Arts Crawl.

“There are times when we also have poetry readings on our evening stops,” he said. “We have had food involved and sometimes we end the night at one of the earlier stops where they’re having a continuing event where you might see a movie or hear a lecture or meet an artist. It’s just a wonderful evening of artistic culture.”