The Life-Changing Experience of InterStim Therapy

Dr. Land Renfroe of Urology Associates in Oxford has been in practice for approximately 12 years and prior to his practice in Oxford was in Jackson. He does general urology, both male and female, but has a specific passion for overactive bladder and the advanced treatment of the problem.

Renfroe finished his residency in 1999 and started working at Mississippi Urology in Jackson. Dr. Chuck Secrest was involved with a program called InterStim, which uses a sacral nerve stimulator (pacemaker) that’s indicated for and can correct overactive bladder frequency and urgency.

“It’s also indicated for fecal incontinence,” Renfroe said. “I was exposed to InterStim at that time and worked with Secrest doing it. And for the last ten years my practice has been geared a lot more toward that program. I’ve been here in practice for about 12 years and we have done quite a bit of the InterStim therapy and have had excellent results with it.”

Michelle Barbee is nurse practitioner for Renfroe and has been with him since 2012. Barbee described InterStim therapy and its benefits: 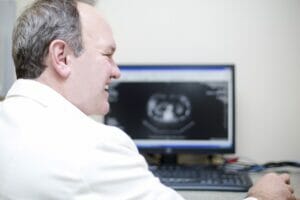 “Medtronic is the leading company for pacemakers, heart and bladder pacemakers,” Barbee said. “When people have failed conventional therapies like medication, exercise and pelvic floor therapy, then we test specifically for sacral neuromodulation. Basically, bladder and bowel function has a central nervous system component, the bladder being a muscle and being controlled by your central nervous system. If there is some nerve dysfunction then patients may be having this problem due to the nerve defect. And we have a unique way of testing that nerve.”

Barbee said the official terminology for the test was Percutaneous Nerve Evaluation and is a test of the sacral nerve, which is a nerve in the very bottom part of the back.

“What we do is a pass a small thread into that nerve and with an exterior box, we’re able to send a signal to that nerve,” Barbee said. “What we’re looking for is whether we are getting a normal pattern; are we able to stimulate that nerve to have normal function. We test anywhere from 2 to 5 days and we have patients keep a diary and obviously it’s symptom-based; we watch all symptoms. If we can restore normal, or at least 50% improvement, then the patient would be a candidate for the implant, which is basically a small pacemaker that is placed in the back part of the body. We call it a bladder pacemaker.”

Renfroe is very excited with the technology and the quality of life improvements it has made for his patients.

“All the bladder is used for is a storage facility,” Renfroe said. “Once urine gets in the bladder it’s not pre-absorbed, so the bladder’s function is to store the urine and then to eliminate it voluntarily. What happens with overactive bladder, and it’s very common, it affects 1 in 3 adults over the age of 40; what happens is the brain is sending inappropriate signals to the bladder that it needs to urinate. And so patients have these involuntary bladder spasms. And that’s not normal. And the treatments for that would be behavioral treatments, hold back on drinking as much water during the day, dietary modifications, exercises and then you’d go to medications.”

Renfroe said that with InterStim technology, the implanted pacemaker can stimulate the nerve and help rectify any false signals the brain sends to urinate and relieve fecal incontinence.

“It’s amazing technology,” Renfroe said. “This small stimulator can correct abnormal signals that the brain is sending to the bladder and can change people’s lives. People who have overactive bladder and fecal incontinence sometimes don’t leave their homes for that reason and their quality of life diminishes terribly. But with InterStim therapy they can once again enjoy going out and resuming normal activities, such as going to church or doing anything they used to do. It is definitely life-changing.”