The world of sports and entertainment has seen many dynamic duos split up over the years:  Kobe and Shaq, Brooks and Dunn, Ben Affleck and Jennifer Lopez. Ole Miss is not immune to such breakups as shown by the sudden rise and fall of the Ole Miss Ninja Turtles. The pair gained national notoriety during the College World Series and it seemed as though the two freshmen were destined to mature from Ninja Turtles to Rebel superstars before too long. That was until infielder Brantley Bell elected to transfer, leaving a lone turtle in Oxford. That turtle comes in at No. 12 on our list, Evan Anderson. 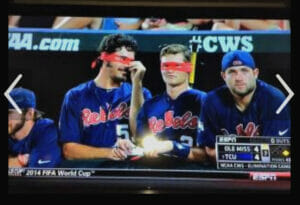 Anderson came on strong in his first season in Oxford, posting a 2-0 record to go along with a 2.11 ERA, 20 strikeouts and just five earned runs in 21.1 innings of work. The 6’5 lefty appeared in 10 games, starting half of them, showing a real knack for being a do-it-all-guy for coach Mike Bianco. Whether it is starting in the midweek, coming in for long relief or being a late-inning matchup problem for lefty-heavy lineups, Anderson has shown that he can be a reliable force on the mound.

While the weekend staff is currently loaded with Christian Trent, Sean Johnson and Sam Smith, Anderson will have a chance this year to prove he belongs on the weekend in 2016. Along with Jacob Waguespack and Brady Bramlett, Anderson will be relied upon heavily in midweek games. The hard-throwing Dale, Oklahoma product features a hard four-seem fastball to go along with his change up and slurve. Given the long strides from the left side and his active moment on his pitches, Anderson will prove to be a nightmare for many out-of-conference teams.

Once Hoover rolls around in May, Anderson could find himself getting a start if the Rebels have to play on short rest. How he pitches against elite conference competition will go a long way toward deciding his role in 2016 as a junior. For now, Anderson’s high upside and elite versatility are what lands him at No. 12 on our list.