Just two days before National Signing Day, the Ole Miss Rebels have picked up a commitment from 2015 defensive back Montrell Custis. He announced the news via his Twitter page.

“It’s been a long journey , I have visited a few colleges. I’ll would like to thank those whom supported me and the university who recruited me. But I’m blessed to say that I will Sighing to Ole Miss Rebels 2015 class. #HottyToddy #Landsharks.” 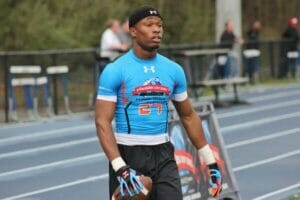 Custis, a native of Hampton, Georgia, was a one-time Kentucky commitment before flipping his pledge to the Alabama Crimson Tide. The Lovejoy High School product had been committed to the Tide since April but wavered in the last few weeks, taking official visits to Kentucky, Florida and Ole Miss.

The 6’0, 175 Lb. defensive back can play either safety or cornerback at the next level but figures to be in the mix at safety for the Rebels. Custis had no shortage of college options as he sported additional offers from Auburn, Clemson, Oregon, Tennessee and Virginia Tech among others.

Rated as a four-star by Scout and a three-star by 247, ESPN and Rivals, Custis is a big addition to the 2015 class. He is also the third prospect to flip from Alabama to Ole Miss in the last few months, joining Leo Lewis (who decommitted over the weekend) and 2016 defensive tackle Benito Jones).