E. and I pored over articles on jury selection strategy being used in two other high profile trials, the Boston Marathon Bomber trial of Dzhokhar Tsarnaev and the trial of James Holmes, the alleged Aurora Theatre shooter.

In the Boston case, where 3 people were killed and 260 wounded, 1,373 prospective jurors have filled out questionnaires which ask, among other things, whether the prospect knows about the bombing, knows anyone who was a victim, or has formed an opinion about the defendant’s involvement.

In Aurora, where 12 people were killed and 70 wounded, 9,000 prospective jurors have been summoned and asked similar questions.

In both cases, prospective jurors are being asked for extensive details about their medical history, apparently to determine if they will live long enough to make it to the end of the trials, which should be in 2019.

E. Hobart brought me to the jury selection conference in the chambers of Judge Liz Pendens DeNovo. I sat behind the prosecutor and E. and listened:

Judge: I’ve gone over the questions you want included for the defense in the Court’s questionnaire, Mr. Calhoun, and I need clarification. In Question 3,765 you ask each prospect to list his or her daily schedule for the next five years.

E.: Correct. I don’t think this case will last longer than that. We’ll need people who are totally unproductive and will not be missed if they are in Court, for example, state and federal government employees.

Judge: And you want the prospective jurors to list every person they know?

E.: Correct, Your Honor. We plan on entering the names into our database to determine if any prospective juror knows anyone, domestic or foreign, who is acquainted with or ever read about Senator Reid or Max Gluteus.

Judge: How would the prospect know who his acquaintances know?

E.: Exactly, Your Honor. The software will give us the connections.

Judge: Er, all right. Here’s another. You want to know if each prospect has ever performed any act which might be considered exercise, such as walking, picking up an object, or bending over.

E.: Right. My client is a professional trainer, and we need to know how the prospect feels about exercise or muscle movement.

Judge: Hmm. You want each prospect to list every person they ever voted for?

E.: And against. The alleged victim is a powerful politician and on behalf of Mr. Gluteus, I must know their political leanings. If a prospect has voted primarily for Democrats, it would show, I believe, a prejudice toward the victim.

Judge: This must be a typo. You want the Clerk of Court to issue a summons for 25,000 prospects to appear at FedEx Field in D.C.?

E.: To start with. And we need to know if each of them has ever read a newspaper or watched t.v., what they watched or read, and if they liked it. They might have read something derogatory about personal trainers or Italians, or something laudatory about Senator Reid.

Judge: You want each prospect to list every time they’ve been to the doctor?

E.: And if you’ll look further on the same page, they should list every injury or illness they’ve ever been treated for, and all medications they’ve consumed at any time in their lives, including pediatric visits.

Judge: That’s a lot of information. And if the prospect were an infant when…,

E.: Thank you, Your Honor. I try to be thorough.

Prosecutor: Your honor, in question number 17,893, Mr. Calhoun asks what the prospect knows and when did he or she know it. I object. It’s too much.

E.: It wasn’t too much to ask in the Watergate case, Your Honor.

Judge: He’s right, Mr. Prosecutor. I believe the defense needs to know everything the prospective juror knows and when he or she knew it.

E.: Whether something is burdensome to the jury prospects, the Court, or the County or State paying for the trial, should not be a factor in the pursuit of justice, Your Honor.

Judge: Well said, Mr. Calhoun. It’s what makes our jury system great. The defendant is entitled to be tried by jurors who have nothing to do and who don’t know anything about anything. I believe Supreme Court cases interpreting the Sixth Amendment make that clear. I am allowing all of Mr. Calhoun’s questions, and directing that the questionnaire be delivered by registered mail via USPS forklifts to each of the 25,000 prospects.

After leaving the conference, I paused with E. on the courthouse steps, turned and studied the Latin words carved in marble above the entrance. I didn’t know what the Latin words meant, but I’m sure it was something important. 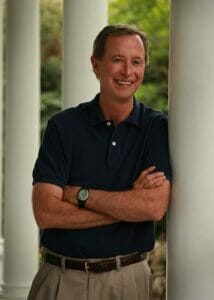