Breakfast with the Balls: One Couple’s Appreciation of Big Bad

I met Dwight and Sharon Ball recently on a sunny late morning at Big Bad Breakfast. The time was their usual: 11:30 and the seating customary for them, a front booth when they can get it.

When I slid into the comfortable spot across from them, warm smiles and an open cordiality like that of a just-returned friend greeted me, along with a menu full of goodies that made my mouth water. Immediately I realized that this was going to be one of the most pleasant interviews I’d ever been involved with.

While it’s a fact that many people have a favorite restaurant that they enjoy frequenting, along with a certain dish they order every time that keeps them coming back for more; most people settle for a once-a-week visit or, in some cases, once-a-month, to satiate their cravings. From the service, to the food, to the atmosphere; it’s that one beloved spot where they like to break bread and visit with friends, old and new, as often as possible.

But since their first visit in 2009, the Balls have been coming to Big Bad Breakfast on a daily basis, only missing their once-a-day meal when either they’re out of town or the restaurant is closed during holidays. 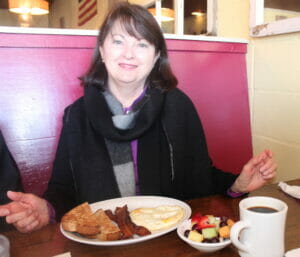 “And even then we’ve asked them to have mercy on us and leave us a brown bag outside the door,” Dwight Ball said jokingly.

This will be the Ball’s sixth consecutive year of dining on a daily basis at Big Bad Breakfast. And every day they order the same dish for each of them, their absolute favorite on the menu: Eggs Benedict with extra hollandaise, bacon and a whole lemon sliced in half for Dwight and the Big Bad Breakfast with two eggs over hard, crispy bacon, with wheat toast and a side of fruit for Sharon and a huge chili cheese hash mountain of deliciousness that they share between them.

“We had heard about Big Bad Breakfast after they opened,” Sharon Ball said. “We didn’t start coming immediately then, but when Dwight’s brother and his wife were in town, we were looking for some place different for lunch, so we decided to come to Big Bad Breakfast. And we were hooked from the very first day.” 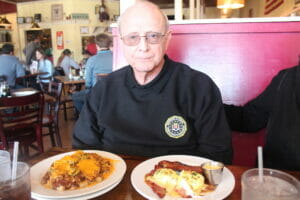 And hooked they really were. They love their menu favorites so much that even when they decide to try something different, they still order their standbys.

“Sometimes we might order something different,” Dwight Ball said, “but we still order our regular meals too. If there is a lunch special or something that sounds really good, we’ll try it, along with our Eggs Benedict and Big Bad Breakfast. And we usually eat it all, it’s just that good.”

The Balls have been married for 38 years and enjoy living life on their own terms. Dwight is an Ole Miss Alum who is a former special agent with the FBI under J. Edgar Hoover. He also taught 3 different Criminal Law and Criminal Procedure courses each and every semester at the University of Mississippi for 29 consecutive years. A former Municipal Prosecutor for the city of Oxford for 6 years and Municipal Court Judge for eight; Ball has been practicing law at his privately owned firm on the Square for over 40 years. 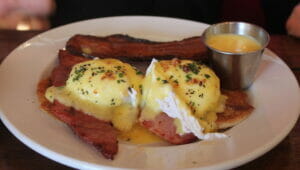 Sharon came to Ole Miss a freshman in 1969 and said she hasn’t left Oxford since. She grew up in a small town in Mississippi called Louin, where her father was a country doctor. Her father had attended the University of Mississippi for two years before going to the University of Tennessee for medical school, so Sharon grew up a Rebel.

The Balls met after Sharon had finished graduate school at Ole Miss and haven’t really been apart since. The courtship continues after 38 years as they both finish each other’s sentences; yet wait lovingly on the other one to speak. The eternal cord of love and commitment to each other is visible and definitely ties them together.

“One time we forgot to tell the folks here at the restaurant that we were going to be out of town,” Dwight Ball said. “We had gone to Memphis for the day to shop. And the manager called us just to make sure we were OK.”

Sharon said her phone rang about 1:00 p.m. that afternoon with the courtesy call from BBB.

“Jill (Stevens) asked: are y’all OK? And I said yes, why? She returned with: well, it’s almost one o’clock and y’all haven’t been in yet,” Mrs. Ball said. “It’s just like family here. We love it. The people that work here, from management to the wait staff genuinely care. And the food is wonderful. Why wouldn’t we come here every day?”

In another instance of reciprocated appreciation of each other, the Big Bad Breakfast staff sent the Balls a Christmas text when they were out of town.

“One Christmas Eve we were in New Orleans,” Sharon Ball said, “and I had a text message from a group of the servers here. They had filmed a short video singing ‘We Wish You a Merry Christmas.’ And they danced a little too as they told us they missed us.” 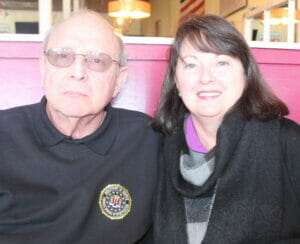 And there is a reason everyone missed them, not just because of their frequent flyer miles at the restaurant; if ever there were two nicer people than Dwight and Sharon ball; I haven’t met them yet. The praises that they heaped onto BBB’s plate were genuine and as each member of the wait staff working that day came by the table to speak and say hello; I could see the admiration was reciprocal.

“We come seven days a week to Big Bad Breakfast for many reasons,” Sharon Ball said. “We love the food and the people who work here especially. The people in the kitchen want to be sure you enjoy the food and when you ask for something cooked a certain way; they make sure to find out if you were pleased with it. And it’s a very family-oriented atmosphere. It’s consistent good food, good service and friendliness. And Jill Stevens, the manager, is wonderful. She has just the right touch in managing everyone who works here. She always takes the time to make sure the customer is happy and satisfied and enjoying their experience here. John Currence has a jewel in Big Bad Breakfast. And we thank God he opened it. He saved us for sure. ”

And Big Bad Breakfast couldn’t have two nicer people who love it.