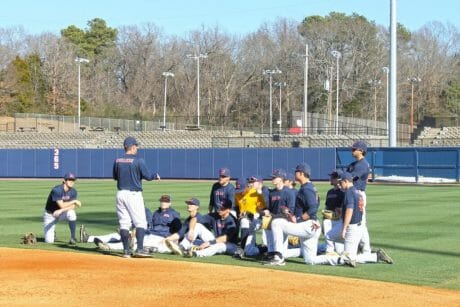 As the 2015 college baseball season starts today, the Ole Miss Rebels will be taking a page out of Hall of Fame Chicago Cub Ernie Banks’ playbook by moving Sunday’s game up to Saturday for a doubleheader.

The decision was announced this morning with frigid weather on tap for Sunday. Forecasts are partly cloudy with projected temperatures in the 20s and 30s and 10-15 mph winds, capped by freezing rain in the evening. Saturday figures to have much better weather with a sunny forecast and a high of 58.

First pitch for Saturday and Sunday’s games were slated for 1:30 each. The new arrangement calls for a noon first pitch for Game 1 with Game 2 starting 30 minutes following the completion of the first. Both games will air on SEC Network+ and on the Ole Miss Radio Network.

The three-game opening series against William & Mary kicks off today at 4 p.m. at Oxford-University Stadium.