Cofield on Oxford — Do You Know It?

Rebels, we are in a special time. The Ole Miss ‘here & now’ is rising on the backs and standing on the shoulders of our heroes who have gone on and fought on before us. We have been a household name before, but not all 15 minutes of publicity are good. But some are. 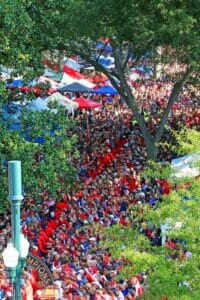 A star of world literary history will forever shine over Rowan Oak for us. James will forever march forward toward the Lyceum. Johnny will forever roam The Vaught’s sidelines and Chucky will forever defend the north end zone. Archie will forever be found crying for his daddy alone in the hall in the middle of the night. And standing in the Grove with your feet firmly planted on and in all that we are, you are Ole Miss.

From these patches of Oxford and Ole Miss earth rise the columns upon which we stand. And it is with the strength of our Rebels forefathers, every single one of them, that we march forever into this new Ole Miss era of ours, of Hugh’s.

Pride comes in part from pain. We’ve struggled, we’ve lost, we’ve been the scorned and we’ve been the mourned. But we have never been torn from the heart of that which only we know, our Ole Miss spirit. It is in the knowledge that when the end has come and you know it’s here, some of your last conscience thoughts will be centered around Ole Miss and the wonderful life which you were blessed to live there.

But before anybody goes anywhere, we have some living to do Rebels. Start it reading Sean Patterson’s moment when he knew he was a Rebel. It happened in the car riding back to Louisiana with a heartbroken Oxford in the rear view mirror.

Patterson said. “After that game, they had lost their perfect season and now they’d lost their best player. After the game, the whole staff was calm. They weren’t staggered. They were more worried about Treadwell than they were the game. That kind of showed me what kind of people they are. I could just visualize myself playing there.”