The History of Chocolate: from Cacao Pod to Creamy Bar 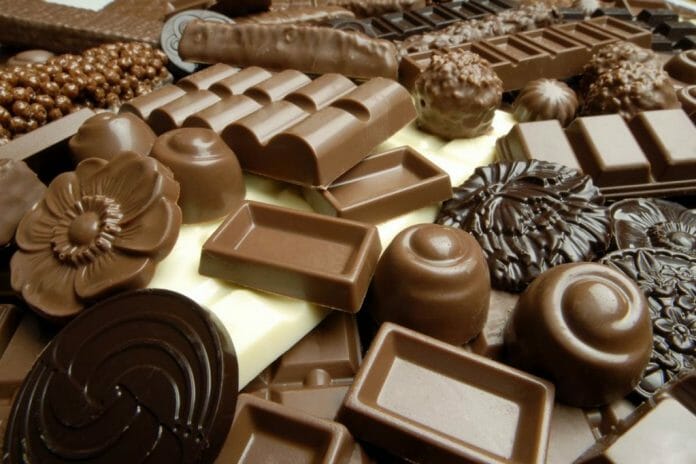 It’s no coincidence that February is both Heart Health Month and National Chocolate Lovers Month. After all, chocolate has been stimulating hearts and minds, literally, for about 4,000 years.

Once reserved as tribute to gods and royals, chocolate and cocoa now fuel a global industry of $117-$128 billion annually. Agricultural sustainability and fair trade labor practices for cacao production are now a major concern for economists and ethicists focused on improving third-world living conditions and the environment. 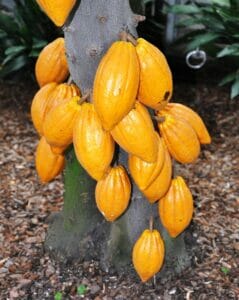 A cocoa tree takes 5-8 years to mature, and they are grown in the shade of banana and mango trees. Each tree is expected to yield about 5 lb of chocolate a year – the beans grow along the trunk of the trees.

Milk chocolate: contains at least 10% chocolate liquor (raw chocolate pressed from carob bibs, the center of the bean shells removed after roasting for 2 hours at 250˚F).

Sweet and semi-sweet chocolate are made from 15-35% chocolate liquor plus sugar, cocoa butter and vanilla.

White chocolate technically is not chocolate: It contains at least 20% cocoa butter, 3.5% milk fat, 14% milk solids, and no more than 55% sugar or other sweeteners, but none of the dark-colored cocoa solids or cocoa liquor, and also none of the stimulants or antioxidants of regular chocolate.

It takes about 400 cacao beans to make one pound of chocolate (450 grams).

U.S. chocolate makers use over 3.5 million pounds of milk daily to make chocolate.

Today, approximately two-thirds of the world’s cocoa is produced from cacao grown in west Africa, and about half of that amount in Cote d’Ivoire, where it is estimated as much as 40% of the labor force has included slave workers.

The average American eats 10-12 pounds of chocolate a year compared to the Swiss, who eat about 21 pounds a year.

The Chocolate Timeline The Mokaya on the Chiapas Pacific coast of Mexico were the first culture known to have used chocolate. 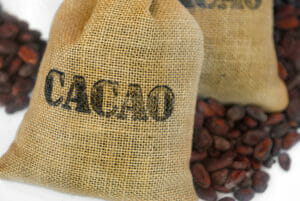 The Olmecs, in what is now the Vera Cruz region of southeastern Mexico, were preparing chocolate beverages in the Early Formative Period (1900-900 BCE). They used it mixed with water, and sometimes with maize and chili for religious rituals or as a medicinal drink.

Mayans (flourishing in southeastern Mexico, the Yucatan peninsula and Guatemala, 1000 BCE -1542 ACE), and Aztecs (Aztec civilization in the central Mexico Valley, flourishing circa 1325-1521 ACE) also made a frothy, bitter drink from cacao; the Mayan version was hot, the Aztec version was cold.

Cacao plants grew abundantly in the Mayan region. Cacao seeds were used as currency throughout the Mayan empire and later by the Triple Alliance of the Aztecs.

The Pueblos, who flourished in what is now the American Southwest, imported cacao from Mexico between 900 and 1400 ACE. Unlike their Central American colleagues, the Pueblos used chocolate in a common beverage consumed by all members of their culture.

The Aztecs believed that Quetzacoatl had been condemned by the other gods for sharing chocolate with humans. By 1400, conquered cultures that grew cacao beans were ordered to pay them as a tax or tribute for being ruled by the Aztecs.

Considering it a medicinal aphrodisiac and energy booster, Hernán Cortez in 1528 took Montezuma’s special xocoatl chocolate beverage to the Spanish Royals. Unlike Columbus 30 years earlier, Cortez sweetened his chocolate drink with West Indian sugar before presenting it at Court. This time the Royals took notice.

The Spaniards started a cocoa processing plant in 1580. They kept strict control of chocolate within their empire’s borders. 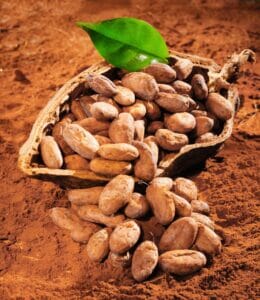 Chocolate was taken to the royal wedding of Anne of Austria (daughter of Spain’s King Phillip III) to King Louis XIII of France in 1615, and soon became popular among the ruling classes throughout Europe and England.

The English, Dutch and French established their own cacao plantations in Southeast Asia and Africa, run between the early 17th and late 19th centuries with slave labor.

Dr. James Baker and John Hannon opened the first American chocolate factory at a water-powered mill in Dorchester, Massachusetts, in 1765, selling hard cakes of chocolate that colonists ground up to make hot chocolate.

American colonials’ chocolate was imported from the West Indies and became a patriotic consumable after the British Townshend Acts of 1767 levied taxes on shipments of tea to the colonies.

American soldiers used cacao as food during the American Revolutionary War; during the War of 1812, Baker’s Chocolate had to be close for 2 years due to the seaport blockades by the British.

In 1815, Dutch chemist Coenraad Van Houten developed a process to reduce the bitterness by adding alkaline salts to chocolate.

In 1828 Van Houten created a press to remove cacao butter from the chocolate liquor, enabling the chocolatier to improve flavor consistency.

Joseph Fry learned how to add back melted cacao butter to render chocolate moldable; Fry & Sons introduced the first solid eating chocolate in England in 1847, but it had a bitter taste. 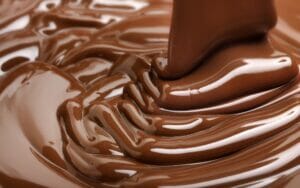 In 1879 Rodolph Lindt invented a “conche” machine to evenly distribute the cocoa butter within the chocolate using oxidation and frictional heat to release acids and volatile chemicals. Length of time conching the chocolate affect(s)ed its flavor, and chocolate bars became a tasty edible.

Hershey opened a chocolate factory for producing those bars in what is now Hershey, PA, in 1905 – near the dairy farms that provided the milk for the chocolate.

The U.S. Quartermaster Corps shipped 20-40-pound blocks of chocolate to Army bases in Europe during World War I; the blocks were chopped into bars for use by the soldiers

In 1937, Ruth Graves Wakefield, owner of the Toll House Inn in Whitman, MA, sold her chocolate chips idea and cookie recipe to Nestlé in exchange for a lifetime supply of chocolate.

M&M’s were invented in 1941 as an energy-boosting ration for World War II soldiers; the hard candy shell prevented the chocolate from melting.

The U.S. government still includes chocolate in rations to troops, and chocolate has gone into space with U.S. astronauts.

For a delicious chocolate truffle recipe, visit On Cooking Southern.