After a heartbreaking one-point loss to Arkansas Saturday, snapping a six-game Rebel win streak, Ole Miss got back on track Thursday, defeating Mississippi State 71-65 and picking up the season sweep over the in-state rival.

As the game opened the Bulldogs and Rebels played with a lot of intensity on both sides of the court. Mississippi State found ways to score easily in the paint over Ole Miss. Coming out of the locker rooms after halftime, Ole Miss got out to an 8-0 run before MSU made a free throw. 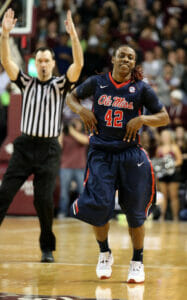 Stefan Moody recorded 29 points in the game with eight 3-pointers in Moody’s first trip into Starkville. Three of Moody’s 3s came in the late minutes of the game to help secure the Rebel win and his seventh 20-point game this season.

Jarvis Summers found his teammates for easy transition baskets early in the second half.

In the first 20 minutes of play, Mississippi State was able to get out to its largest lead of 10 points, but Ole Miss found a way to cut the deficit down to one.

At the half though MSU took a 32-27 lead into the dressing room.

Terrance Smith lead the Rebels with eight points in the half.

Ole Miss hit five 3-pointers in the first half to keep them in the game. State was able to outscore the Rebels in the half in the paint and pulled down multiple offensive and defensive rebounds in the final minutes.

The Rebels return to action on Saturday night as they host the Tennessee Volunteers at 6:30 p.m.