There’s more to learn at Mardi Gras than how to not embarrass yourself. 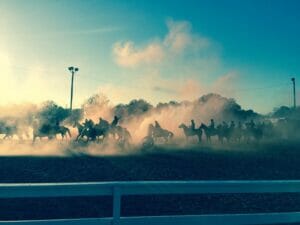 Oxford Police Department took a few mounted patrol officers to the coast this week for Mobile’s Mardi Gras School, a basic course that teaches riders how to keep their composure and ride their horses safely in an official capacity. Officer David Misenhelter said riders come from as far as New York, Ohio, and Montana to learn mounted patrol techniques and get their horses used to the sights and sounds of street work.

“It’s an awesome school for first timers and provides networking opportunities for units close to each other,” Misenhelter said. “Many riders attend annually to improve their skills, learn new techniques, and bring back what they learned to their organization.” 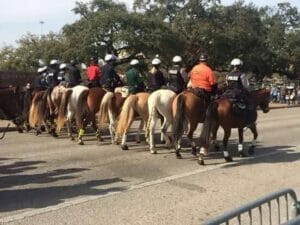 Out of the nearly 70 officers in attendance, Burt was also honored as the most improved rider during the course. Misenhelter had attended the course previously but opted to pay out of pocket to return this year and free up the paid slots for other officers.

“Several times throughout the week, I was pulled aside by other attendees,” Misenhelter said. “They told me how impressive it is to have riders like Officer Ed John Burt because of his positive attitude and never failing willingness to learn and achieve.” 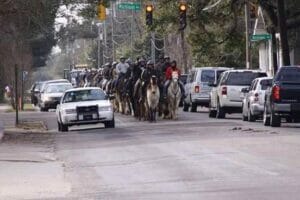 Lately, the OPD Mounted Unit has improved through the generosity of Evie Tumlin with Cedar Wind Farm Equestrian Center in Oxford. Her help didn’t go unnoticed by riders at the school, as several highly experienced riders noticed improved horsemanship since last year. The non-profit group, Friends of the Mounted Patrol, handles donations for the officers and helps care for the horses.

For now, the Oxford Mounted Patrol will stick to controlling weekend masses on the Square, but thanks to their Mardi Gras School training, they’re ready for another big football win or Double Decker crowd in Oxford.

Amelia Camurati is HottyToddy.com editor and can be reached at amelia.camurati@hottytoddy.com.