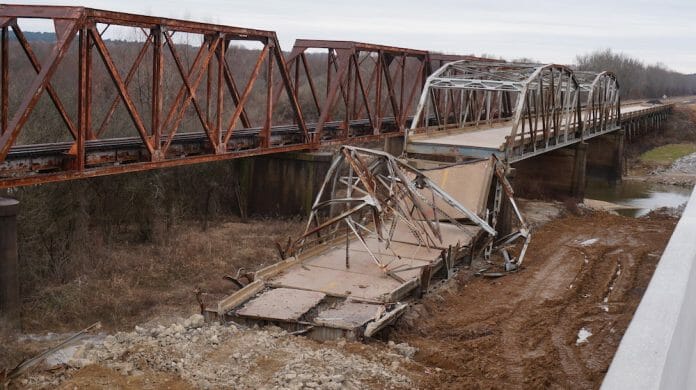 A piece of Mississippi history that enabled William Faulkner and thousands of Ole Miss students to purchase illegal whiskey and also facilitated the movement of Federal troops in securing the enrollment of James Meredith at Ole Miss will soon be no more.

The three truss steel bridge constructed in 1953 over the Tallahatchie River between Oxford and Holly Springs is being torn down by L.A. Contracting as a new river bridge now speeds traffic north and south. The bridge holds rich memories for a generation of students and Lafayette County residents who drove across it to the Marshall County line to purchase illegal alcohol at Johnnie’s to well known watering holes like the Hobba Grill or Hole In The Wall located in Holly Springs.

Larry Wells, publisher of Yoknapatawpha Press, recalls he went to Johnnie’s on his first date with Dean Faulkner, niece to William Faulkner, and who later became Wells’ bride. Dean Faulkner Wells, a noted biographer, died in 2011.

“I never made a run to the Hobba but Dean and I used to patronize Johnnie’s. In fact we went there on our first date. We bought some beer but I found out that you could buy a pint of bourbon out of the drive-in window (not in the store itself),” Wells said.

Wells confirmed that William Faulkner availed himself of the services of Johnny’s, owned by Johnnie Zanola, and located on what was then a gravel road that leads to Harmontown.

“I asked Dean if she ever bough whiskey there. She said ‘Pappy’ (Mr. Faulkner) would send her to Johnny’s when she was a student at Ole Miss. I asked if they carded her, and she said ‘No, I told them it was for Pappy.’ Talk about the good ole days. Sorry to see that old bridge go down.”

Ole Miss alum Eddie Fritts, retired executive director of the powerful National Association of Broadcasters and a Washington insider, said “this ole bridge would have lasted another 10 years or more were it not for the many times I, along with numerous Ole Miss students, drove up to Holly Springs to enjoy an afternoon or evening at our favorite pub. ‘The Hole In the Wall’ was our favorite pub in those days. Most of those stories are best left for word of mouth as opposed to anything printed,” Fritts said.

Former Mississippi Governor, Washington D.C. consultant and Ole Miss alum Haley Barbour has fond memories of crossing the bridge to and from Oxford during his college days at Ole Miss.

“About 25 or 50 of us rushees stood around outside or sat on the hoods of cars in the adjoining pasture area because we didn’t have anywhere else to go, “ Barbour said, adding alcohol was legalized the summer between his freshman and sophomore years.

Former Chancellor Robert Khayat said that each time he crossed the bridge he thought of William Faulkner’s book, “The Reivers” and “Boon Hooganbek” on that ill fated trip to Memphis.

“I think that is the bridge where Boon discovered he had a stow-away who turned out to be one of the funniest characters in the book,” Khayat said.

When 30,000 federal troops descended on Oxford to enforce the enrollment of James Meredith as the first African-American at the University, a large part of the contingent was bivouac in the Holly Springs National Forest, which was federal property. Troops in military vehicles crossed the bridge going to and from the national forest and Oxford.

According to Adam Jonson, location engineer with the Mississippi Department of Transportation the bridges endearing relationship to Ole Miss was almost secure for generations to come.

A new bridge across Jackson Avenue was needed as the federally funded bike pathways project paved the old railroad bed. 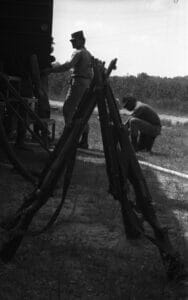 The historic nature of the bridge and its example of truss construction were of interest to faculty in the School of Engineering. Because the bridge was determined eligible for the National Historic Register of Historic Places the Mississippi Department of Transportation (MDOT) offered it to the public for “relocation, preservation and maintenance. Since there were no takers, the bridge is being taken down.

Bruce Gray, historic resources specialist with MDOT, said the rusting three truss railroad bridge, built in 1908, which stands along side the highway bridge “is considered eligible for the National Register of Historic Places. It will remain in place.”

It was not determined when Johnny’s closed its doors, but presumably that was sometime after July l, 1966, when local option legislation gave the Mississippi Tax Commission authority over the legalization of alcohol sales.

When cold beer in grocery and convenience stores finally received a favorable vote in Oxford, the late Tom Freeland, who edited the popular blog, North Mississippi Commentator, wrote, “when Oxford voted to legalize wine and spirits Johnnie Zanola, upstanding member of the Baptist Church and proprietor of Johnnie’s, was behind the anti-wet campaign. Thursday, the coolers will go on and Oxford will have cold beer, which will eliminate the last reason for a drive to the county line.

The Highway 7 Tallahatchie River Bridge will be completely removed this spring, ending an era of history long to be remembered by a generation of Ole Miss students and Oxford residents.