Ground Zero: the Juke Joint Choice of the World’s Most Discerning Music Lovers

Morgan Freeman is at home at the large table at Ground Zero Blues Club.

It’s lunch time at the popular juke joint he shares with friend and business partner, Clarksdale Mayor Bill Luckett. Freeman orders spaghetti and catfish – on the same plate. Luckett is busy making sure everyone else at the table – a Mississippi-born, Hollywood-transplant actress, two magazine publishers, Luckett’s wife and a 17-year-old teenager from Meridian accompanying her mother for the ride – are all well fed.

“Have some of these,” Luckett says, motioning to the teenager, Hattie Banks, who is already managing an oversized burger in her small hands. “They’re fried grits with some honey on the side. Man, they’re good.” The plate is presented on a vinyl tablecloth laden with graffiti. The fried grits don’t last long.

The conversation at the table changes hands like a round of musical chairs. Freeman’s phone rings and he talks, even though his attention has also been taken by a friend stopping by to say hello. Others at the table swap stories, laughing robustly, or take photographs of the seemingly unusual lunch group.

Mid-way through lunch another guest joins the crew. Noted harmonica player and musician Charlie Musselwhite strolls in with his companion. He greets the guests at the table then slides comfortably in with the rest of the group.

Another passerby taps Freeman on the shoulder. They chat for a moment and pose for a photograph. For most of the lunch crowd, though, this is a common scene in this small, Delta town, a place the hugely popular actor calls home.

At this same club a few weeks earlier, actress Shannen Doherty was in with Holly Marie Combs, both from the “Charmed” television series. The pair were in town to film an episode of their new reality series “Off the Map with Shannen and Holly.” While they lunched, 15-year-old guitar and blues prodigy Christone Ingram, usually called “Kingfish” and recently bound for a White House concert, played to the international blues-seeking lunch crowd. When the filming wrapped, Doherty was smiles, chatting with “Kingfish” and lingering long after her work was complete.

Luckett and Freeman opened Ground Zero Blues Club on Blues Alley in Clarksdale in 2001. The ramshackle building – complete with worn couches on the front porch – dates to the early 1900s and sits on the town’s railroad line. It is formerly Delta Wholesale Grocery and Cotton Company.

“The Delta Blues Museum opened here in 1999 and was bringing in tourists who wanted to hear live blues music,” Luckett said. “So we decided to accommodate them. We came up with the name Ground Zero. I came up with the German zero and the basic design and Morgan added the red guitar for our logo, which has become pretty recognizable everywhere.”

Ground Zero Blues Club – aptly named for being the “Ground Zero” of the world’s blues aficionados, has become an international blues destination in itself. Tourists from around the world pour in – some for a hopeful glimpse of Freeman – but most for the music that ensues long after the lunch crowd has left.

A host of famous musicians, both blues and non-blues, including Jerry Lee Lewis, Willie Nelson, Pinetop Perkins, Robert Plant, Paul Simon, Dan Aykroyd and Elvis Costello have visited and/or played the club. On one recent Saturday there were visitors from Australia, Stockholm, Paris, London, San Francisco, Los Angeles and New York. The eclectic crowd might not be unusual for a New York dive, but in Clarksdale, where the population reaches just more than 17,000, the host of year-round internationals seeking an authentic Mississippi experience is stunning. “Just walking around here, I can feel the beat right beneath the ground,” said a tourist.

And once there, they’re reluctant to leave. “Naturally as the club became successful, there was a demand for a place where folks could ‘fall upstairs to bed,’ and Morgan really wanted a Clarksdale apartment, so that’s when we decided to do the Cotton Company Apartments upstairs,” Luckett said. 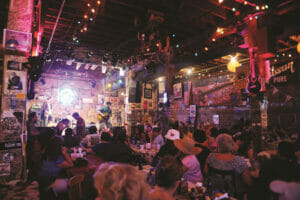 Of the eight brightly decorated and spacious downtown apartments, seven are all aptly named after the seven grades of cotton from “Good Ordinary” to “Good Middling.”

Like the downstairs restaurant, bar, pool hall and stage, graffiti has made its way into the hotel entryway.

“The graffiti starts at the front door and continues up the stairs into the hallway of the apartments. It kind of tells the story of the folks who have stayed with us. The rooms don’t have graffiti though,” Luckett said. He recites some of the scribblings on the hall walls. “Too much of everything is just enough,” he quips. “Lower my standards, not possible,” he says. The graffiti is so numerous that there is a published picture book dedicated solely to Ground Zero Blues Club scribblings.

Recently named as one of the top lodgings in the Mississippi Delta by Forbes magazine, the Delta Cotton Company Apartments each have personalities and configurations, kitchens, dark hardwood floors and high ceilings.

Luckett chuckles when he describes how guests can feel the downstairs beat in several rooms – especially in Room No. 5. “A couple of rooms are directly above the stage and really do rock to the music playing in the club at night,” he said.

As the lunch crowd disburses, Luckett and Freeman slip quietly into the afternoon. Freeman is on a short break from filming, but Luckett is due to film “Battle Creek,” an Allison Eastwood directed film in Canton, Mississippi, the next morning.

Clarksdale bluesman Josh “RazorBlade” Stewart slides behind the stage’s piano and begins singing “Easy Like Sunday Morning.” He is immediately joined on the bench by a tourist from Germany. They play an impromptu duet, and the remainder of the German tourists sing along from a long table in front of the stage. “Razorblade” feels the beat. The Germans feel the beat. The guests upstairs in Room No. 5, Strict Middling, feel the beat.

To rent a room at the upstairs Delta Cotton Company Apartments, visit their website.